Something more interesting than the music run

The kids have been back at school for three weeks now. Unlike in Scotland I am no longer on the school run as there's a free school bus - yippee. I can't say I miss those ten minutes listening to over-tired kids whining at each other about everything from how much space they are taking up on the back seat, to whose turn it is to choose the music, the front seat or (not) scrape the ice off the windows.

I am, unfortunately, still on the music school run. Léon plays violin, Amaia viola and Anna electric guitar. Of course, the strings are in the music school and the guitar is in Anna's school (the local middle school), so that's a harrumph to start with. Last year when Anna was still in the last year of lower school, I had to run her to the middle school fifteen minutes after school chuck-out for her lesson, so I was really looking forward to this year when she could just stay behind after school. So the timetables turned up and Anna's lesson, of course, had been moved to two and a half hours after the end of the school day🙄

So she comes home on the bus then needs to be taken back later. Amaia and Léon are an hour apart in the local music school - different start times, different end times and Anna is of course bang smack in the middle and there are no school buses three hours after the end of school.

So I set out on Tuesday at my usual 4:35pm and finally got me and everyone else home by 6:50pm. The bloody music school is only 15 minutes away but the three times circuit and detour via the house for drop off and the middle school takes fully two hours and fifteen minutes, so this week, I started to mull over alternatives.

Where could I go if, instead of driving round in circles for 2 hours and 15 minutes, I simply jumped in the driving seat and drove in a straight line for those 135 minutes?

So, apparently not only could I make it quite a bit down into Germany to Rendsburg if I opted for a southern route, I could also get as far as Malmö in Sweden if I opted for a more eastern route. 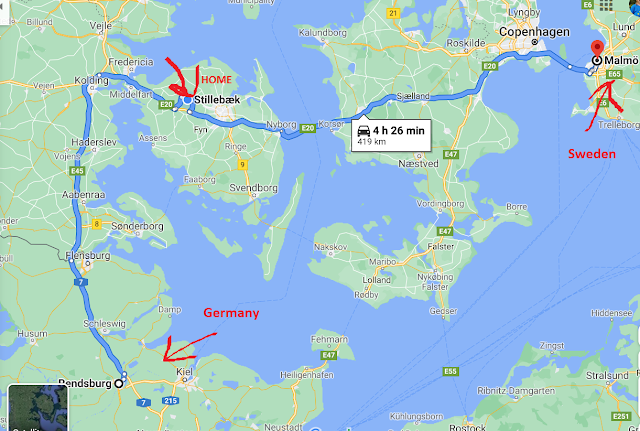 Rendsburg looks like a nice day out. Have a look at these pics. And I know Malmö is definitely ok because I've been there (and they've got great kebabs too!)

So, kids... if I don't come back for you next Tuesday, you might want to check out if mum's gone off on a wee magical mystery tour😉