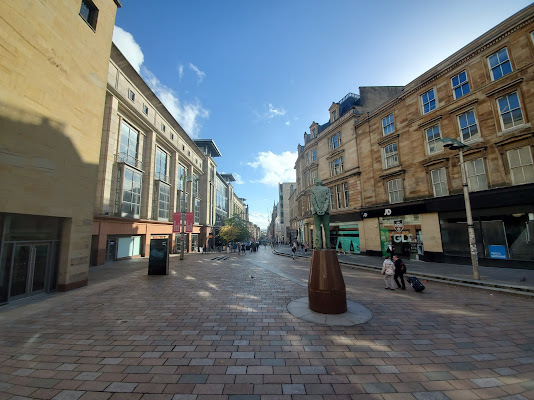 I was over in Scotland for four days - for the first time since February. So this was the first time I have been over to experience the effects of Covid and the run-up to what is increasingly likely to be a no-deal Brexit. I am not sure what I was expecting, but it was an interesting experience.

Simultaneously it looks like things are still completely normal and as if things are changing, ever so subtly.

I touched down in Edinburgh as all the cheap flights to Denmark leave from there. A 6-15pm arrival meant grabbing a bite to eat before jumping on the intercity coach, but I knew that would be fine as there is a large M&S Food at the arrivals gate and various other smaller shops... except it wasn't ok as they were all boarded up with signs saying the falling passenger numbers made it pointless to open at the moment. The rest of the shops were also closed. Finally we found the Costa was braving the pandemic so they rustled us up two toasties to go. On departure on Sunday, things were more open behind the departure gate, with about 50% of the shops open, but still I couldn't help but wonder how long Edinburgh airport (or presumably any other UK airport) will be able to weather the Covid storm without passengers. And even if the Covid threat goes away, passenger numbers are unlikely to reach previous norms with a falling pound, rising unemployment and the knock-on effects of the UK becoming a rogue, pariah state. And fewer flights and fewer airports will inevitably lead to the UK becoming even more isolated and insular than its current unrecognisable standpoint.

So Charlotte and I jumped on the bus - this was newish experience as I almost always hire a car, but given one of the main reasons for my visit was to sell our old car, I didn't need two while I was in Glasgow. This was the second company that worried me. The coach had around 60 seats and shuttles between Glasgow Buchanan bus station and Edinburgh airport in both directions every half hour between around 4am and midnight. There were three people on to coach to Glasgow other than us two. On the way back on Sunday at 5pm there was one. And given the driver has to be in Edinburgh in case anyone wants to take the return leg, he must have to drive it through even if no one shows up for the outward one. I couldn't help but wonder how close this company must also be to liquidation.

Thomas and the kids couldn't come this time as it wasn't holiday season, so I had been given a list much longer than my arm of what they needed from back home. Some of the items were Scottish things they were missing like Scottish crumpets and potato scones. Of course, we make our own in Denmark, but they aren't the same. Other items were specific brands we haven't found here. Thomas likes an oil-based shower gel and the closest we have found here dries his skin out. He also had a medium-sized list of newly published political books that he would rather I picked up than he had to pay the postage on. Finally all the kids had asked for some clothes for school - general underwear and then some specifics.

Given the books were all fairly new, I figured I was best going to the largest bookshop I could find in Glasgow. However, only one of the books was in stock - the rest would have needed to have been ordered in and therefore would have arrived too late for me. I guess people are buying their books online even more than before so Waterstones is probably about to be another 'To Let' sign on the high street, and those signs have definitely increased since my last visit.

Thomas tends to wear M&S shirts to work. He asked me to get a few of the warmer cotton long-sleeved ones just like those I had bought for him last November when there had been four different designs. I tried Sauchiehall street and Silverburn but although there was a selection of maybe four or five different long-sleeved models, there were none of the warmer winter ones he's used to buying and no gap on the shelf to indicate they'd sold out. Maybe there was an issue with supply?

I proceeded downstairs to get myself and Anna new bras and again was confronted by a supply problem. There were numerous bras but very few in either her size or mine (and we take completely average sizes). Oh well, at least I could pick myself up a couple of those really soft cotton nighties I usually buy in M&S every two or three years. Last time I bought two was when I was going into hospital in November 2018. I had a choice back then between three or four colours in plain, two patterned, one with long sleeves and one almost down to my ankles. I remember trying three sizes - mine and one above and below to see which felt best. This time there were two models - one plain, one with stars - I could have the one remaining size 8, two size 22s or the one size 24. So, again, it seemed to me the selection was greatly reduced and the supply of average sizes completely missing. So no nighties either😒

This pattern repeated itself several times. The kids have been buying their underwear in Primark since they were born. There's nothing Amaia likes better than looking at all the different pants and socks and mulling over whether to have days of the week, llamas, stars, colours etc This time for age ten I could have white pants or pink pants and nothing else. And I could have plain socks or stripy socks in her size. For Anna, who is adult size, the selection was even smaller - she could have white socks, full stop.  So yes, it served the purpose but the selection was entirely gone. They had also asked me to see if there was anything they might like to wear to school. I found nothing between Primark, M&S and Asda that jumped out at me. Usually I struggle to contain them in these shops but not this time.

The final item on my 'to-get' list was a spare double duvet cover for Marcel and Charlotte's rooms. Danish double duvets are bigger (because Danes are bigger) so the duvet covers here don't fit my Scottish 200x200s. I tried my usual haunts for those and although every place had two or three, very few had anything that would go with my colour schemes (which are not outrageous - a yellow room and a terra cotta room). Between the five shops I tried it came down to a choice of one grey one!

I mentioned this to a Scottish friend (who I was chatting to online). Despite being my mother's neighbour, she couldn't meet up with me for coffee because of the new Corona restrictions😢 (next time Lynne!). She's a keen golfer and said her favourite gold shop is also being hit by supply chain issues already.

Finally, I went on the big grocery hunt for my greedy ex-pats. Things I take for granted were much diminished - eg Asda now seems to have mild chorizo or nothing - no extra special, no extra spicy (which I'd been sent for). Their selection of vitamins and shower gels was also smaller than usual. Maybe everyone has simply switched to shopping online instead of in person but the wonderful selection I am used to in Scotland is definitely getting smaller.

A further issue I came across was the lack of adapting to the new norm. I nipped into Matalan, desperately trying to find Anna the bras that had been missing in M&S, only to be confronted by the biggest unsold and unreduced selection of suitcases I have ever seen in my life. Of course, when they ordered them in back in the winter maybe they didn't see the holiday market falling of a cliff but they aren't trying anything to shift them to make space for something they could sell instead. Home Bargains was the same... they had two aisles dedicated to travel and two to Halloween costumes, decorations and sweets - I can't imaging guising is going to be particularly big this year! Going in to strangers' houses to delve into a communal bowl of goodies - I think not!

Anyway, I'm not trying to draw any conclusions yet - it could be Covid, though our shops haven't changed significantly because of it, it could be a supply chain issue, it could be Brexit. It is all very subtle and I suspect if I was still living there, I might not even have noticed if one item dropped out every other week or if the selection just became narrower, it is simply more obvious to me because Covid has meant that I was away for almost seven months rather than my usual 6-8 weeks.

It will be interesting to watch the next few weeks and months to see what happens. With Covid on the rise again and chaotic no-deal looming, I could be stuck here till after the new year and if I am, it will be very interesting to compare this blogpost to one I write after my next visit.