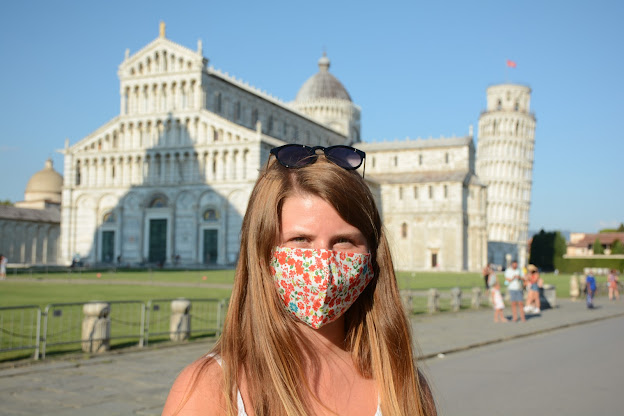 Language assistantships have been high on the list of conversation topics in our house this year, for obvious reasons. They run in the family - kinda like short legs and green eyes... André had been a French assistant in Greenock when I met him back in 1984-85. I had gone on to be an English assistant in France in 1987-88 and now it is Lottie's turn and of course she's opted for her spiritual home - Spain.

And I have to say, even if you drop Covid out of the equation - what a bloody palaver compared to how it was in my day! (Now don't I sound old?!) I may be suffering from severe memory loss, correct me if I'm wrong, but as far as I remember, they told us in first year that we'd be assistants in our third year - there wasn't really much else on offer, and they told us that in our fourth year we'd spend a semester in the country of our second language studying at uni. In the autumn of second year we filled in a form. Mine said France please, preferably somewhere near Metz and that was about it. Then around the April or May of that year I got a typed letter telling me which school I had been assigned. I then left in the August, spent the best part of a week at the École normale de Nancy learning what was expected of me before being released on the last day to two teachers from my school, who'd kindly come to pick me up. From there I was taken to the school which (unluckily) was in the middle of nowhere, or as it turned out luckily, because that meant the school asked if I wanted to share a free flat with that year's German assistant, Friedrun, who I am still in contact with today. That was it, more or less.

Thirty years on things have been complicated beyond recognition. Now only about 40% of kids do an assistantship, most prefer to opt for the study option for their year abroad. I am not sure why given they aren't paid, but that seems to be the norm now (until Brexit anyway, I guess it might change back). And worse still in their second language they aren't offered the study option because of the university terms overlapping so are expected to take themselves abroad and job hunt (until Brexit cocks that up too, I presume).

Charlotte decided she'd like to do it the way I did, so asked for the British Council application form. I use the term 'form' loosely... I've seen shorter PhDs to be honest. Imagine the worst job application form you've ever seen and then add another 15 pages on the end. Despite going abroad for a year being compulsory, she still had to fill in many, many pages explaining exactly why she was the best person for the job, her experience, everything she'd ever done with kids in the past - right down to brushing her siblings' teeth when they were toddlers. She'd to justify which region she wanted to go to, and pick two back-ups, she'd to rate the age-group of kids (or adults) to teach in order of preference, she'd to write a novel explaining whether she would choose a rural or city setting and why.

All applications had to be in by the first of February or they would not be considered. On receipt of her form she was told that she would be informed if her application had been successful by the end of June, and thereafter all successful applications would be sent to the foreign country and they would try to match candidates to an appropriate school by the last week of September!!! (for a job with a start date of Oct1). These kids are 20 years old, some (like me - a February baby from the pre-deferral era) are only 19. Imagine being told you will be given, in some cases, less than a week's notice to move country and find accommodation and you have to pay a deposit up front despite your first pay packet being due end November?

Charlotte was actually amongst the first to be informed of her regional allocation in July, though it was another month before she knew which school she would be going to. Being assigned Madrid meant there was only one airport so she could easily have booked tickets if Covid wasn't causing uncertainty, with about four weeks to go. Some students were told simply that they got the south, with no indication till a fortnight ago whether that meant the Mediterranean coast or practically in Portugal. And some are still waiting to hear.

Over and above the whole application fiasco, they then have to fork out nearly £100 to get an international police and background check done, and a second one of these needs to be done at the Spanish level, on arrival. She was also sent a ten page health and safety assessment to complete for her university, but given this turned up with a deadline of before she had been assigned a region, let alone a school or age group, this was shelved till it turned up again in a revised format last week.

All this is the standard 'assistantship process' 2020s style - I'm so glad I am not young today - it just seems so much more stressful than how it was done in my day! Anyway, of course, Charlotte has now had the whole thing compounded by a global pandemic.

Some unis have cancelled it (after all that!), some have advised their students to phone the schools and postpone their start dates (though many of the foreign schools are refusing this request), some have even threatened students that if they accept the job they've been offered they will kick them out of their study programme at home for defying their advice!

Charlotte is lucky, in so much as Glasgow is being quite pragmatic - they have told the kids: go as planned if you feel you can do it safely, drop out for a year and do it next year and graduate a year late if you don't, omit it altogether and try to get into honours without it if you feel capable of doing so and graduate a year early. All the students Charlotte knows from her high school who went to other unis that have cancelled the students' placements are now looking to go out to the foreign country with no job and look privately as they don't have accommodation booked to go back to uni at home later this month, don't want to waste a year doing nothing and don't want to attempt to enter the dual minefield of Covid and post-Brexit student exchanges next year. They figure they might as well sit abroad surrounded by Covid rather than home surrounded by the same issues.

So, back to Charlotte. Having been assigned the region she wanted, followed by the age group she wanted in a bilingual school just half an hour from where she ideally wanted to be and with enough time to actually do something about flights and accommodation, Covid reared its ugly head again knocking all that on the head so she's been on the edge of her chair now for a month waiting to hear if it would go ahead, if they would go back to remote teaching or what.

With school staff back in Madrid for the first time since March just two days ago, she was waiting to hear if she could finally book a flight and start the flat search (despite being a bit cash strapped as both her summer jobs in Spain got cancelled because of the virus). On Sunday night she was starting to feel the relief you get knowing this would at least be the week she would finally know. Suddenly at 11pm on Sunday she received an automated email in Spanish from Madrid council telling her she had been withdrawn from this year's programme, her job offer had been cancelled and her access to the webpage that allows essential workers into Spain terminated. Worse still it said she would not eligible to reapply in this academic year.

She was frantic - no one else on her facebook group chat had received that email, so Spain hadn't cancelled it, something must have gone wrong specifically with her application and triggered it. Hadn't they received her police record check on time, or what? After a sleepless night she spent all of Monday morning phoning and emailing around for clues; this was not helped by the bank holiday in England, I can tell you! By Tuesday they had ascertained it was simply an administrative error - 'Charlotte Somebodyelse' had requested to withdraw because of Covid and someone had highlighted the wrong name! I kid you not! By Wednesday, she had a new job offer (in the same school) and access to the essential worker site restored. I have to say she's one cool cookie. If I'd had to deal with that at that age (even without Covid) I'd have collapsed in a sobbing heap, but she calmly sorted the whole thing out, in Spanish, without a single tear.

So she's now waiting to hear the final details from her head mistress before hopefully flying out some time in the next two weeks. Thereafter she has to shell out another £100 for the course I did back in Nancy, though they're not sure if that's online or in person yet. It's going to be an odd year to assistant - social distancing, masks, closed attractions, and much more and she is fully aware that she won't get the normal experience but she's promised herself she'll do a second year out there in 2023 to make up for it, and given she still has an EU passport unlike her contemporaries, she will at least be able to do so...