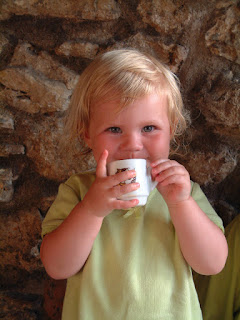 I used to drink my coffee black - when I was a kid that was. It was probably because my mum drank it black so didn't think to put any milk in mine when she first introduced me to instant coffee in the 80s. All through uni my entire friend group were all '237's on the vending machine - well except for one weirdo who didn't (and still doesn't) drink coffee of any colour (we love you all the same Gillian 😁).

By our mid-thirties, we'd all moved on to white - maybe our old intestines just couldn't keep up with the straight paint-stripper caffeine.

This year on my birthday, I woke up and wondered if my aging insides might not feel better with no caffeine at all. I was only ever a two cups a day girl, but still, I thought it couldn't hurt to try decaff for a week. I had an old jar lying around that I used to use for my decaff friends back home so I tried that. For two days I had a blinder of a headache. I thought the reaction was completely over the top given I really didn't drink much coffee, but it worried me all the same, so once I'd come through the other side of the cold turkey, I decided to stick with it.

And what a pain that is turning out to be. Decaff is everywhere in the UK, has been for decades, Italy was the same when we were down there in the summer. Like me it is the taste they are after, not the drugs, but Denmark is a complete pain in the backside. Danish supermarkets are notoriously poorly stocked. It might be different in central Copenhagen, but where I live there are only two supermarkets that stock it (out of more than ten within 15 minutes drive) and each of those has a choice of one (over-priced) brand, when it is (occasionally) in stock. Worse still, cafés think you're insane if you even suggest it. I tried three different ones in Copenhagen airport on Wednesday and they just looked at me as if I'd asked if they happened to stock green and purple stripy hairless cats for human consumption.

I'm not missing that lull in the afternoon when I need a coffee, I'm no longer in need of a caffeine fix but I hope at some point Denmark will catch up with the notion that coffee without caffeine can be a nice addition to the menu too, and not some weird health food item you need to buy off the Internet for home consumption only.