Once a space cadet, always...

Léon got his glasses the first month of p1. He was five years old. I still remember sending in a note with him explaining we'd just found out he was really long-sighted and had been struggling for the first month at school to focus on his books and the board, but all was now well as we'd got to the root of the problem. His teacher was an adorable, lovely young woman - Miss David. She was one of those cuddly, loving, caring infant school teachers. A few months later, once she'd got to know him better and she had patently forgotten that he had originally been spec-free, she stopped me one night as I was picking him up, 'Miss Buchanan, can I have a word? Oh, god, I thought, what's he done... 'I just wanted to ask - can you remind us - em - was it his eyesight or his hearing that you said Léon had a problem with? It's just, we're not always sure he fully hears what we ask him!'  I assured her it was definitely just his eyesight and she wandered off looking somewhat embarrassed.

Ten years on and he's still a bit of a dreamer. And he isn't in the slightest nosy. We can sit round the dining table discussing something for half an hour and unless you actually ask him to pay attention, he can completely filter it out if something else is on his mind. The others can't help but hear it, but Léon can be thinking about his favourite sport, or his music, some meme he's read on the internet or whatever 15 year old boys think of with no knowledge of the conversation taking place around him.

Often when we ask him to do something, he hears half of what you say and figures whatever he has understood is enough to be getting on with. So I can say at 2pm 'Léon can you make me a coffee for 5pm, that's when I'll be in from town' and I come home to a cold coffee that has obviously been made at 2pm! It can be frustrating, endearing, and even amusing at times. His siblings call him 'doughb', (short for doughball and he doesn't seem to mind). How he does ok at school is beyond me - maybe they are just more interesting and good at holding his attention than us.

So, why this story?

Here's a picture of our hall and Léon's bedroom door: 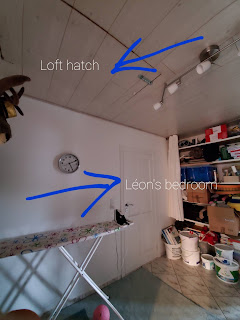 And here is a view from outside the house: 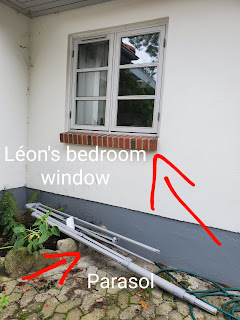 When Thomas pointed out to Léon yesterday that although the weather was still reasonable, we wouldn't be needing the parasol again this year so could he take it down and put it just outside his room so it could be stored in the loft till next spring, what would you have taken that to mean? Léon's interpretation has had Charlotte creased up with laughter most of this evening.
Doughb'!