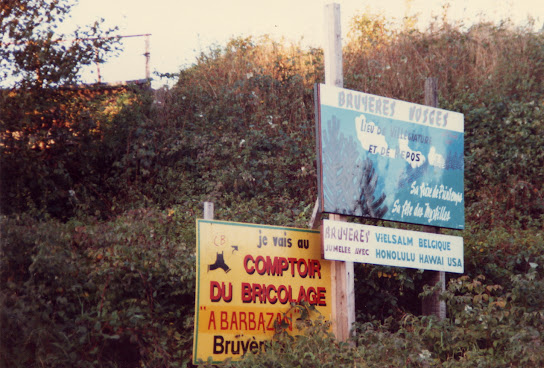 I mentioned we'd been talking about Charlotte's (and my) assistantship recently.

She always knew I'd been to France to do that in the 80s and having had foreign language assistants in her high school, she knew what it entailed, but it wasn't really until a few weeks ago that she asked me more about that year and I thought back to it in any detail.

One question that brought back floods of memories was 'What was it like when you arrived?' I can guarantee she was not prepared for the answer to that. When I think back on it now, I think I was a bit taken aback by the whole thing too, so I am not sure I ever really mentioned it to anyone, probably not even André...

I was assigned a tiny little town in the Vosges. I'd never been to the Vosges and I'd never heard of Bruyères. A quick check in the local library informed me only that it was a little town of about 4000 inhabitants that lived mainly from forestry commission work. But this was pre-Internet so the encyclopedia didn't say much more. My parents happened to be holidaying in France that summer (I was home alone, cat-sitting) so they swung by to check it out and came back laughing - telling me I'd struggle to find it, it was so small and boring, especially with us being used to Glasgow - the biggest city in Scotland.

So I arrived the first week of October 1987. To UK readers that is possibly meaningless, but to French readers of my age group and older, it might ring the odd bell. I arrived in this sleepy little hamlet-sized place in the back of beyond but it was far from sleepy. There was only one street with shops, but it was crowded. The main square was crammed full of vans, each one with a larger satellite dish on the back than the next. There were vans marked TF1, France 2 and more - every conceivable channel, even some close international ones. Press were swarming everywhere, microphones were being thrust in every direction but this was no joyous event. There was a sinister, oppressive feel to it all. There was a lot of whispering, pointing, huddles of people. The vans were even staked out in front of the collège where I was to be a teacher.

At first the German assistant and I had no idea what it was all about. We sat in our little flat looking out across the Vologne river that meandered beautifully along the edge of our view. We thought it was quaint, endearing even but we had no idea of the infamous nature of the Vologne.

After a few weeks, the reality of what was going on hit us like a tonne of bricks. His face was on every newspaper. I can still see it now, as I did then, le petit Grégory. A child had been brutally murdered three years, almost to the day, earlier in the next village, a couple of kilometres away. His family were suspected of tying him up and throwing him, alive, into the Vologne. He was four years old. It had become the most infamous case in France in the interim and was still unresolved. The first week of October 1987, a new judge had been put in charge of the case and had decided to hold a reconstruction of the murder that week. One of the accused's presumed accomplices was a young female cousin of the dead boy and a pupil at my school.

While discussing this start to my year abroad, Charlotte was scrolling through Netflix when suddenly, I saw his face. I couldn't believe the coincidence. Netflix has just put out a mini documentary series about the case called Who killed little Grégory. So we watched it together over the next few days. I felt like I was back in that beautiful, yet oppressively sinister place all over again. Everyone who lived there then feels tied to that case in some small way and probably always will. Friedrun (the German assistant) and I were to become part of it too, along with all the other members of those close-knit villages vosgiens. It became our home and we loved it dearly but at the same time it would always have a dark undercurrent you felt you needed to escape.