Another way of looking at Scandinavia 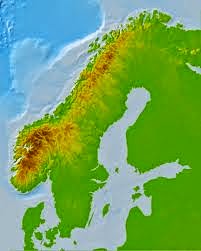 I was looking at fault lines and tectonic plates with Léon on google the other night - his latest interest.

I happened to mention something about Norway and he asked exactly which bit on the map Norway was. I pointed to it but because it was a satellite image there was no boundary with Sweden so he took both Norway and Sweden to be Norway. 'Oh', he said, 'is Norway the country that looks likes an evil tyrannosaurus eating up Denmark?' Suddenly the scene in Jurassic park where the wee guy is eaten on the toilet seat sprang to mind!
Posted by Phyl at 3:39 pm