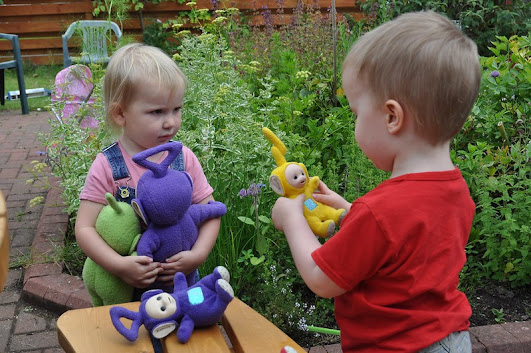 My nephew has little teletubbies. Amaia loves teletubbies too. I had been on ebay looking for something else when I noticed someone was selling all four teletubbies for £2-70. Assuming they were the same as Al's, I didn't even read the ad, I just bid the £2-70 and was surprised when no one outbid me. A week later the postman rang the bell and handed me a huge package. I wasn't expecting anything large so was more than surprised. I ripped it open and all four teletubbies fell out three times the size of the ones I thought I'd bought! That's the thing with photos on ebay sometimes. But this time it was more than definitely to my advantage. Since then at least one tubby has accompanied us on every outing we've been on! Amaia is just thrilled to bits!