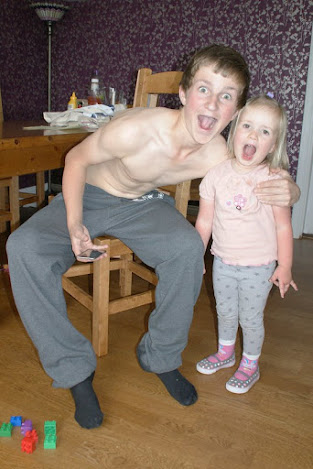 Positively one of the best things about having such an age-spread across your kids is the reaction you get, say from a teenager, when a four-year-old comes out with what we parents know to be a completely normal, random four-year-old curiosity question just when your fourteen-year-old is least expecting something they consider to be so highly inappropriate!

Wednesday, high school gets out early so Mr Lazy texts me for a lift while I am out at primary and nursery anyway. I get him first. Outside nursery (the last pick-up), it is a sunny, pleasant day so a large crowd of parents is waiting at the foot of the hill while the kids run about having fun. I am standing with Marcel, Charlotte and Léon. Anna comes bouncing out wearing her favourite summer butterfly shorts. She takes Marcel's hand. She loves her big brother. She thinks he's knowledgeable. She says quite absent-mindedly, as if the thought has just flitted into her head as she looks down at her shorts, 'Marcel, I've been wondering...?' Marcel is nurturing towards the wee ones, he bends down lovingly and asks 'What?' Anna replies 'I've been wondering if butterflies have vaginas, and if they do, what they might look like!?' Marcel looks like he's going to pass out from embarrassment, quickly looking from side to side to see if anyone has heard. Of course, given he doesn't reply instantly, I can hear her repeating her question over and over at an increasing volume quite unawares as he drags her quickly to the car with a look that says almost pleadingly - Mum don't you have a large sack we can stick her in (preferably head-first) till we get to the car!?
Posted by Phyl at 11:57 pm