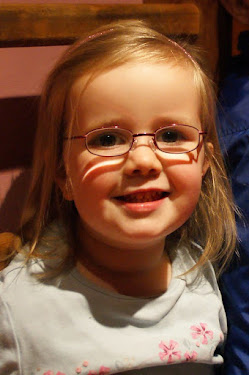 Anna picked up her new glasses at 5pm. She was absolutely thrilled... for the first hour. She had no complaints. Then she got home and was looking at the clock in the TV room. That's when the whining began. She couldn't focus on the numbers on the clock - all the numbers were black, fuzzy lumps. Distressed, because she could easily read the clock numbers without the specs, she started taking them off and on, claiming she needed to clean them.

Last year in September, when Léon first got glasses we had driven back and forward to the opticians at least twice in the first fortnight because they didn't seem to be the correct prescription, but what a difference a year of experience makes for the parent! We know now that a child who has always needed glasses but has never had them learns, with a struggle, to focus without them. When they first get glasses, it takes them a week to ten days to stop compensating. For the first wee while, they think that the glasses don't work. I swear I must have told Léon to look through his glasses, not over them a hundred times a day at first, until suddenly one morning he got up and was happier with them than without them.

I guess that fortnight or so for Anna has now begun.
Posted by Phyl at 7:40 pm

She looks very cute with them!