MORE ON THE BLOODY SPECS 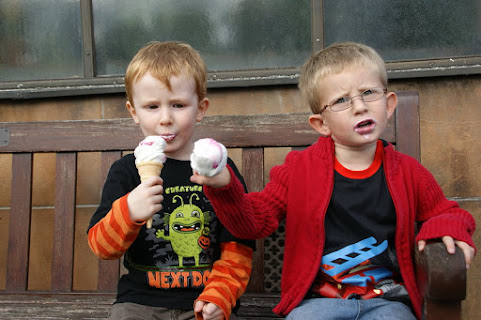 So today after school I notice Léon is constantly trying to look over or under his glasses rather than through them. We decide to do our own eyetest. Thomas opens a cookbook with small pictures. Close-up, he asks What's that? He points to a mushroom - Emmm, I dunno - a doughnut? What's that? pointing at a cow - A brown puddle? From across the room we try a distance test. I show him a tractor and he squints under them and gets it right. He fails again with the specs on. We start to worry he has some other kid's specs. I phone Specsavers and they say to bring him back in but it's too late today so arrange to do it tomorrow. I then try his library book with the specs on, asking him to point at an 's', a 't', an 'e' an 'o' etc and he gets it all correct with and without the specs on. I don't understand. Stress, stress and more stress! Why couldn't this have happened once he had the vocabulary to say something is sharp or blurred. When I ask if it is better with or without his specs he simply bursts into tears and says he wants to keep them because they are cool with Mr Tickle on! Stress :-(
Posted by Phyl at 6:44 pm

Beginning to sound like too much magnification perhaps ??
Might also explain the car sickness ?
A good check is necessary at the optician but of course this'll be difficult cause he's so young !