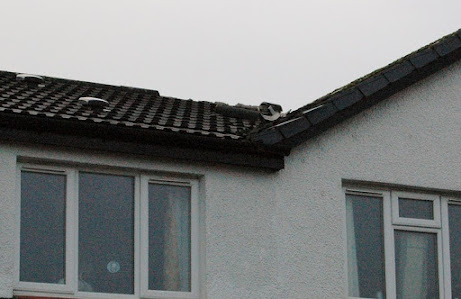 I had discovered the missing fence. I had found the smashed greenhouse panes. The leaking dining room window, hall ceiling and wall had not escaped me during the course of last Thursday's Bawbag. Even the two missing roof caps at the apex of the front of the house had been noted down... but I couldn't see any major damage on my roof...

Then the bloke who lives across the road dropped by today to ask basically if we shouldn't be wearing hard hats every day coming in and out until it was fixed... Until what was fixed? You see from his top floor he has a much better view of our roof than we do. I walked as far as I could away from it to get a better angle.

Holy shit! Has someone been up there with a crowbar and a hammer?

I have now been back on to the insurance company sheepishly mentioning I have found a few more issues since we last spoke!