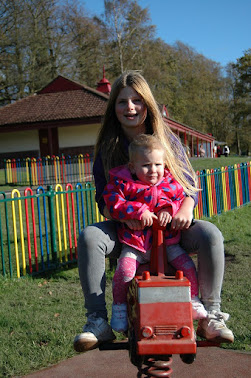 Amaia is a weird baby!
I have had five kids so I have watched language development over and over. There haven't been drastic variations between numbers one through four but five is a different kettle of fish.
When Marcel was between one and two he referred to himself either as Marcel or moi. Marcel wants sweeties, Moi veux des bonbons. Lots followed suit when she came along (though using Charlotte, not Marcel of course!) Léon said Nénaw - which was his pronunciation of Léon. Nénaw wants... etc Anna never once referred to herself as Anna, simply started by saying 'I want' and 'me want'.
All four when shown a photo of themselves would have pointed and said their first name.
Amaia refers to herself as 'Mine'! Mine want apoo (apple).
And if I show her this photo and ask who is in it 'Charlotte and Mine' she replies, quite clearly!
It is very cute :-)
Posted by Phyl at 12:54 am