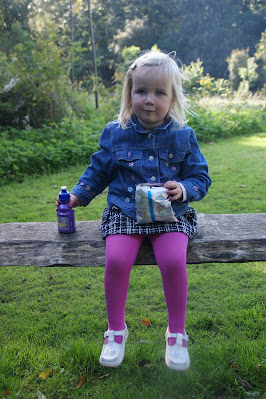 Apparently linguistic obsession is genetic. I didn't realize that until today!

You would think that having a mum who speaks English, a dad and grandmother who speak Danish, a grandfather who speaks German and siblings who speak French would be enough for one three year old... Nope!

The imaginary grandfather ('Silly mad John') Anna made up six months ago is apparently Polish and speaks to her in Polish. She informed me of this today at lunchtime and proceeded to tell me his words for various things around the house - a table, chair, bread, butter and the likes, What I found surprising was that the Polish words she made up actually sounded Slavonic rather than Germanic or Romance. I thought that was pretty observant for a child who doesn't know any Slavonic languages, though maybe she was picking it up from Thomas speaking Russian to Marcel over dinner last night (long story)!

Given my Polish only stretches to hello, goodbye and how to read the back of the recipe packets for the sauces I occasionally buy in the Polish supermarket, I asked if SMJ usually greeted her with dzień dobry. She looked condescendingly impressed, agreed that was how he spoke and wandered off muttering dzień dobry over and over to herself!