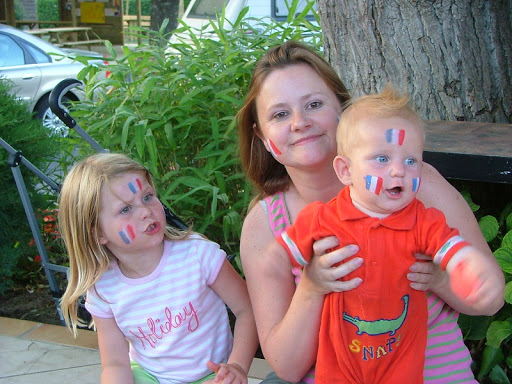 We had this idea, given there are so many of us in the family, that we would have a family world cup sweepstake. The idea was for the six biggies to receive five teams each and so no one would claim unfairness Amaia could receive the two teams left over. We haven't decided on a prize value yet. I figure the winner will determine the type of prize we need to buy. Charlotte, being a big footie fan, was so enthusiastic she drew up all the teams from the Internet and put them in a hat ready for the big draw... so imagine her disappointment when she ended up with Australia, Ghana, USA, Algeria and Serbia! Mine weren't much better: South Africa, Côte d'Ivoire, Uruguay and Slovakia with the saving grace of Italy whose team might manage to roll about pretending to be injured again long enough to get into the final! (Miaow) Léon was pleased with France, as was Thomas with Denmark (though less with England). Thomas and Marcel split the bulk of the decent teams, but I have a sneaky feeling the winning prize might end up being a jar of Blueberry Baby Pudding given jammy Amaia drew Brazil (and Chile)!
Posted by Phyl at 11:50 pm

Email ThisBlogThis!Share to TwitterShare to FacebookShare to Pinterest
Labels: sport