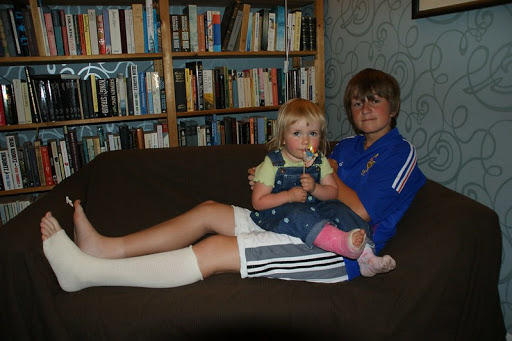 Well - almost. Anna broke her leg nine days ago as you know. Today I got a call from Marcel, who was meant to be with his father but when he was left with an injured foot after a football tackle today couldn't initially get through on his house phone, so rang me instead, leading to me spending another two hours of my weekend in casualty. (What did we do in the old days before kids had mobile phones?) I'm beginning to think I need a season ticket! It turns out he's pulled a few of the ligaments on either side of his left foot and won't be able to take part in any sports for four weeks. Having done that myself four or five years ago, I seem to remember it was about fourteen months before I could comfortably walk on my foot for a whole day. Hopefully he'll heal quicker as he's younger. Especially given he tried out for the school football team two days ago! Fortunately the East Renfrewshire school sports' competition was last week, otherwise he'd have missed out on becoming the region's bronze medal shot putter for the year. And Anna was a little disappointed his tubigrip wasn't pink, of course!
Posted by Phyl at 12:50 am