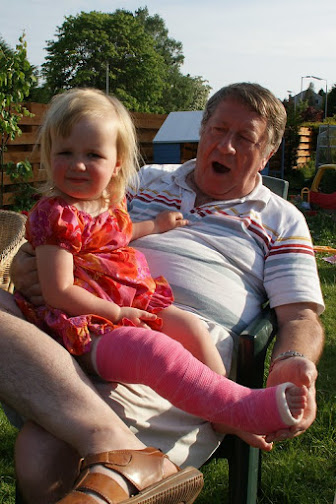 I went to a charity book sale that my friend was holding in aid of breast cancer in her back garden yesterday afternoon. Both she and her husband work for the NHS ironically. As the women sat around chatting, the many toddlers took turns on the big trampoline. All the kids except Anna were brave enough to have a shot. After everyone left I made to leave myself but my friend suggested I stay an extra hour as we hadn't got round to chatting. With only Léon, Amaia, Anna and her own four year old left, Anna finally decided she was brave enough, not to jump on the trampoline but simply to stand on it. Léon and my friend's son walked across the trampoline towards the exit to let Anna stay there alone. They were quite slow and quiet so as not to frighten her. The movement under her feet however made her wobble and fall to her knees on the surface of the trampoline. She didn't fall off, but started to cry. I figured she was just feeling a little scared as she often is around such things. My other friend carried her over to me, she cried for five minutes then sat on my knee hugging me. When we got up to leave she refused to walk but it had been a long, hot day so I carried her to the car and drove home. At home she still refused to walk. I made dinner, gave her calpol and thought that after an early night she'd have forgotten all about it. After all it wasn't swollen or bruised. This morning just before 8am we were awoken by a happy little voice shouting in Danish as always that she was awake. Thomas went up and took her out of bed as usual and tried to stand her down and she started to scream again. This just wasn't normal so I bundled Anna, Amaia, a buggy and a papoose into the car and was in Yorkhill by 8-30am. No one else was there so we were taken straight away. She refused to weight bear. No amount of coaxing worked, so she was x-rayed and they believed they could see a tiny hairline fracture above her knee. She was quizzed as to what colour of plaster she'd like and she agreed to pink. As soon as the doctors started to apply the five layers on this hot day she started wailing at them in mixed English/Danish My will ikke want that! She became ever more frustrated as she shouted ikke over and over to no avail. Eventually she calmed down and I took her home. She looked a little fed up most of the day as she was completely immobile. She didn't seem to be in in pain but was quite sad and clingy. She had seemed to be cheering up towards bedtime though we didn't put our finger on why until Thomas came in holding her pyjamas At last I can take this off she announced, assuming that the pink leg was part of the day wear that would be discarded along with the flowery dress. An inconsolable little girl was then carried up to bed wailing Why? over and over as she tried to get her head round it staying on till next Wednesday at the earliest.
Posted by Phyl at 12:09 am