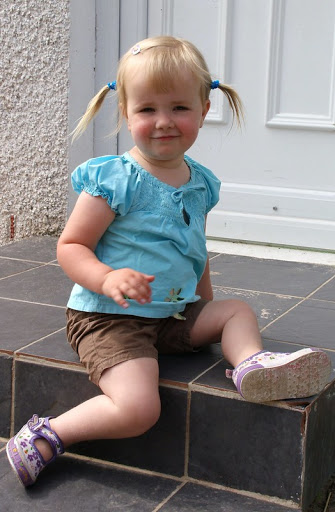 I love the way bilingual toddlers decide which words they want to use in each language. To a man they use mainly the right words in both languages but there is always a category of word which will not be translated no matter who is being spoken to. For example, at two Marcel much preferred grenouille to frog so even if he was speaking to a monolingual English speaker, he refused to use the word frog although he knew it. I have a lovely video clip somewhere of him at two recounting a complicated story about a princess kissing a grenouille and the grenouille turning into a prince! Anna has several preferred Danish words. She always uses at rutsje for to slide and at gynge for to swing, even if she's speaking to my mum, and when counting she always counts: one, two, three, four, five, six, otte, ni, ti. Don't ask me what seven has done to offend her in both languages but for some reason she always skips it and swaps language there! Sweet!
Posted by Phyl at 12:59 am

Ellen doesn't like the number 7 either. She almost always remember it now, but just a month ago she always skipped it.

(BTW - is it possible you would consider killing the pop-up ads on your blog - they're really annoying - but sometimest rather fun, since once in a while they're from Ryanair - your alltime favorite carrier. :))