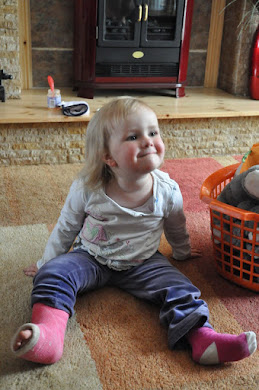 Anna is to start her free state nursery place the first week of January next year. As is the case in the UK free nursery places are offered to all three and four year olds. They are meant to complete a year of ante-pre-school, and then a year of pre-school and then they start school around the age of five. The cut-off point for school starters in Scotland (not England) is January 1st. If you are born after January 1st you can start school in August of the year you turn five. If however, like Anna, you are born a week too early at the end of December, you have to start school in the August before you turn five. This wouldn't offend me if she was then allowed to start her ante-pre-school year with all the kids who she will be going to school with, but because the government only provides nursery for three and four year olds she misses two whole terms of her ante-pre-school year disadvantaging her and all the other youngest school starters - those who could probably do with the most help if they are to start school at 4 years and 8 months. Given the only two criteria for receiving your state nursery place are that you are toilet trained and can talk by your third birthday, I see no reason why Anna couldn't be given a place from August despite being two - she has been potty-trained since her second birthday and can talk very clearly but instead I have to keep her home five extra months disadvantaging her educationally. It's just not fair for the littlest ones.
Posted by Phyl at 12:20 pm

Email ThisBlogThis!Share to TwitterShare to FacebookShare to Pinterest
Labels: education

Write to your MP !
Although from the sounds of that eejit he was educationally disadvantaged too as a youngster, a biggie, a teen, a young adult and still manages it even today !!
On second thoughts why not just lie about her age ?