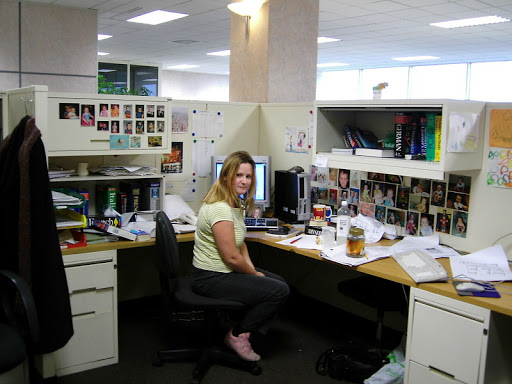 Since I resigned back in November, I have had a large cardboard box sitting on the floor in my kitchen. I went into the office for a meeting and someone handed me it saying my office had been cleared out and my 18 years of personal possessions put in the box.
I didn't really feel like looking in it. I didn't suppose it contained anything I actually needed at home. I figured it had a couple of cups, a nailfile, 10 years of photos that at various times had been on my office wall.
I put the bin out tonight for the binmen and noticed it was nearly empty - a good night to throw out anything I didn't need to keep.
I brought through the box. It was odd to see 18 years of paperwork.
I found drawings by the kids that I had had on my walls. One by Charlotte aged 2, one by Marcel aged 4 - it was of me holding his and Charlotte's hand, from a time of innocence before he discovered the chart show and chatting up girls on msn!
I found my first ever computing tutorials. I had forgotten I knew nothing of UNIX when I first started in Collins.
I found folders on every project I ever worked on from the first ever English framework back in 1991 right through to the stuff I am now working on freelance.
There were many papers I had written. Some sounded almost like I once had a functioning brain. Funny to think all that is somehow meaningless now. It was almost an out-of-body experience watching myself go through all the dictionaries, computing projects and the rest... weird, sad really...
Posted by Phyl at 7:00 pm

Email ThisBlogThis!Share to TwitterShare to FacebookShare to Pinterest
Labels: work

Hi Phyllis - emptying boxes is a queer business - I took away with a box that had a sizeable chunk of my Colins life and I still can't throw it awa!