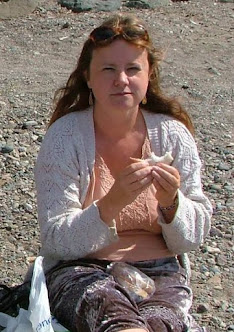 It's maybe something that happens to you with age but I have found over the past few years that I am less willing to put up with things I would have put up with when I was younger. (Hence the mid-life life changes amongst other things!)
I went to a funeral last December. One of Marcel's friend's fathers died suddenly in his mid-40s a couple of weeks before Xmas. Although I didn't know the man, I knew his wife and four sons, so went along. It was a humanist funeral. I had never been to a humanist funeral before. I had been to many religious funerals both Protestant and Catholic, including 3 of my 4 grandparents. You would have thought that the funeral of someone close to my heart should be more moving to me than that of a stranger, but I have never been to a more moving funeral than the humanist one and it was because I could relate to it.
I have never taken any comfort from being told about my loved one being under God's protection now, in a better place or that Jesus died for their sins. I have sat through every funeral till last December thinking and feeling it is utterly meaningless to me.
When I arrived, unsuspecting, at the crematorium last December, they were blasting out Hotel California. Interesting, I thought, but I drew much more comfort from a song I remembered my parents playing during my childhood, rather than a hymn with words I could not relate to. The speaker, a female humanist 'minister' (if that's the right word) stood up and spoke about how the couple had met, what they'd done in their life together, then she recounted each child's favourite memory of their father. Two other non-religious songs were played - one from an opera, one other pop song (I can't remember the details.) At the point where a normal religious minister would have been saying prayers, this minister told the congregation that if they were religious they could use a few minutes silence to pray, if they weren't they could feel free to use those minutes to think about the man and his family and any special memories we had of them.
Everything fell into place for me. At last I was at a funeral I could participate in. I stood their crying for a man I had never met and his 4 poor boys left fatherless at just 10, 11, 15 and 19. I cried because I could relate to thinking about a family and a missing member. I could participate. I could feel like an insider instead of some excluded weirdo for the first time in my life in that situation. I had found how I wanted my life to end. I think so many people assume a funeral (or wedding or whatever) needs to be religious because it is traditionally so, but I have always found that at the saddest times in my life, the last thing I want is to feel alien and excluded.
I went home and started to think through my funeral, hoping it wouldn't be for some time. Obviously I won't be there (except physically) so those I love could go against my wishes but they will know what my wishes are at least.
First I thought about my old cardie - I have had it forever - maybe 15 years. Every time I buy a replacement I revert to it because it is just the right weight and being cream it goes with everything - I thought I would get buried (or cremated) in my cardie (though I might change my mind now I have a new coat - photos to follow)! I would select 3 songs that mean something to me for the funeral so that when they are played those who really knew and loved me will be moved by them, knowing what I would have thought when I chose them for them to listen to. And I would ban religion from it. I don't mean I don't respect religious friends - I would have them say as they said at the funeral I mentioned that there should be time for those who do have a faith to pray to whoever they want, but I also want my non-religious friends and family to be given moments just to remember the good times, remember me at 80 in my scabby old cardie shouting at the grandchildren to smile nicely for the camera!
I got to talking about this with my dad a few weeks ago and he's been doing the same! He was considering being buried in his singing Santa tie (not sure if he's going to be wearing anything else!) and he's chosen a couple of very amusing songs and made me promise not to let mum opt for anything religious in a moment of grief and madness! I presume he'll be taking a golf club or two with him too!
Posted by Phyl at 10:23 pm

Email ThisBlogThis!Share to TwitterShare to FacebookShare to Pinterest
Labels: culture

God ,,, Oops I mean anything but God ,, but you really are My Daughter ,.., Love you
You are hereby OFFICIALLY in charge of my funeral OK ?