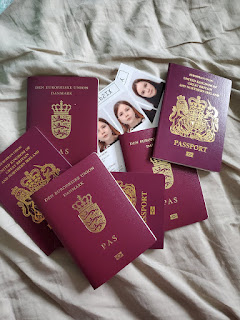 In my house we have twelve passports. That could go up to thirteen if Thomas manages to regain his German one (which his dad signed away when he changed nationality when Thomas was ten) and even fourteen, in five and a half years time when I become eligible for a Danish one... Passports are expensive little buggers though, and this morning I've found out that they are more expensive if you need them to courier them abroad - £75.86 for a child's ex-pat passport, and that is without factoring in that they want me to send over their current UK one and a photocopy of every page (and it states 'including any blank pages' 😡) of any other passports they hold, before they will make a start on their application!

There are some odd rules, I have to say. Anna is fine, at over twelve, she can self-certify her identity with a signature, but at ten Amaia has to have a fellow UK citizen verify hers (which is odd given she already had to sign her Danish passport which she last got renewed at the age of six!) So the full rules state that the certifier needs to be a UK citizen with a UK passport, living in the UK and not related to Amaia. Given Amaia is eligible for a UK passport because I am a UK citizen (and she was born there), these requirements are odd. Had I flown here with her at birth and never returned, no one in the UK could fulfil these requirements, so she'd not be able to get a passport till she was twelve. And it's all a bit over-complicated, given she is recognisable from her old photo.

I also think the cost is a bit steep for five years. Already the standard £56 is more than the adult price for the equivalent duration. I would definitely be tempted to start using only their Danish ones, if I didn't think our current fascist-in-chief might use that as an excuse to deny them their citizenship at some point further down the line.