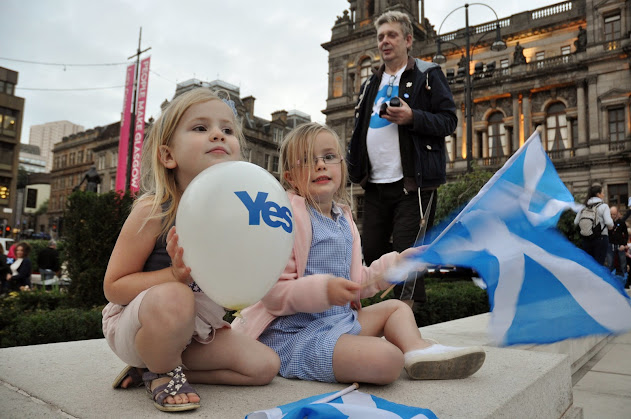 I've taken myself by surprise this morning...

I was asleep, or rather dozing at 5am when Thomas came in from counting votes in East Renfrewshire in the early hours of the 19th. He didn't waken me. I knew instantly we must have lost. I lay in bed dazed. I don't know why it surprised me given we'd been the subjects of much hate and lies in every part of the press every day for more than two years, but I am an optimist, and I had been in George Square the night before where optimism was buzzing.

I got up to do the school run. The little ones asked the result. Charlotte and Marcel had been following it through the night on social media, so knew already. Léon's face crumpled over his cereal bowl and he started to wail: How can people choose bombs over us kids? he sobbed. Anna, tears leaving her eyes in a perpendicular trajectory, shrieked: How can I be expected to pay for uni if they bring in tuition fees? Quite clued up for a six year old, really! I tried smiling optimism, kind of like you do if you're telling your kids someone died, or you're divorcing their father. They weren't fully convinced but went with it for the duration of breakfast, at least. Léon then claimed he felt too ill to go to school, but I felt too deflated to deal with him, so told him school was on.

I drove the biggies to high school and dropped them at the gate, no issue there. I drove the little ones to primary and dropped them at the gate too. I had to say hi to the janitor who was on the patrol. That was harder. I've known him 12 years. I barely nodded and legged it back to the car. I drove Amaia to nursery. I had to sit in the car and compose myself for a full five minutes before I went in. I live in a wealthy 'no-leaning' area so most parents were greeting each other in a happy enough manner. I was concentrating on getting in, walking to the correct room, getting Amaia's shoes and jacket changed and putting on her badge, signing her in and saying hello to her teacher and the head of her room without bursting into hysterical tears and falling to the ground in a heap. I walked through smiling little four year old faces and all I could think was how close they had got to a rosy future and how it had been stolen from them. I wanted to hug each individual child and apologize for the failings of the adults around them. I got back out and sat crying in the car, unable to move off because I couldn't see to drive.

On my way back the petrol light came on in the car. I would need petrol to go back to nursery for pickup. I considered it. I realized I could not physically bring myself to buy petrol because firstly I'd need to greet the garage till attendant without crying and secondly I would need to walk past the stand of thirty newspapers lying some more and gloating at me from the stand. I could not bear to watch TV or read newspapers to see their spin on the whole thing. I couldn't even look at facebook. I was actually physically incapable of doing so. I opted to drive my people carrier for the rest of the day despite its diesel-guzzling 2.7 litre engine. And at 3pm, I sent Charlotte to pick up the kids from primary because I knew I couldn't stand there at the gate without sobbing my heart out and quite honestly making a spectacle of myself.

I went home after nursery at 9. I went back under my duvet and I wept like a baby. Fortunately I had no work that day - the advantages of freelancing! I didn't eat. I didn't drink. I lay in bed and cried all day. And I tried to work out how to move away. I went through all the problems of where I could go that all my kids speak the language (the biggies are French-speaking, the littlies Danish.) Marcel is applying to uni here - I didn't want to live in a different country from him. I didn't see how I could go anywhere till after Lots finishes school as she's already in third year at high school but by then I would have two here and potentially children as old as twelve having to pick up schooling in another language... and that's without even considering my poor mum who lives alone, round the corner. I felt utterly trapped.

The last time I felt like that was nine years ago. Thomas and I were best friends and had been for many years. I had begun to realize I was in love with him but I was married, albeit very unhappily, to someone else. I wasn't sure if he was aware of my feelings towards him and he had never told me either if he saw me as anything more than his best friend. Somehow we got into a conversation about the state of my marriage and his lack of partner and it all came out. His reaction towards me was fine that day but the next he popped up on MSN and told me that he would never find a partner if I continued to be his best friend because he couldn't see past me and he told me I should try to fix my marriage. He said he had decided he could no longer be my friend and that he intended never to speak to me again. It was a revealing conversation as it gave me the jolt I needed to realize I had to leave my husband but from the day he told me we could no longer be friends to the day we decided to talk about an alternative to his proposed plan (this was a period of nearly a month) I felt the way I did yesterday. My life had been snatched away from me. It had become meaningless. So having felt this way once before I fully expected to wake up feeling the same today. I even optimistically remembered I'd lost 10kg in the month Thomas had stopped being my friend and was already mentally clothes shopping two sizes smaller for the end of October!

So I woke up this morning and I was no longer crying. My eyes were dry and I jumped out of bed. Today I woke up with a 'let me at them' attitude that took me completely by surprise. Instead of giving up, I'm already angry enough now to ask myself what more I can do next time round. It was too good a movement to die. And my kids deserve the future I'd got close enough to touch. Too many lies and broken promises marred it this time round and we now know we need to find a road into the media. So I sat on Facebook and Twitter regrouping with the people who had inspired me. I sought out friends of friends I had met and been inspired by and I decided I didn't need heavy baggage so I also decided to unfriend those who bring me down and stress me out and one or two others who I actually enjoy talking to but who had mentioned they no longer wanted to see indyref posts. I knew I couldn't adhere to that and the cause was more important to me! I was amazed to see National Collective, Wings, Ginger Dug, the Common Weal people and all the others had woken up in the same state. We had managed to galvanize 45% of the national vote despite being demonized and marginalized, despite being lied about and vilified. In a single day the SNP, the Greens and the SSP have added a third new members. Despite never having been a member of a political party, I suddenly find myself googling join-up pages. If that's what it takes, I'll work on it from the inside! With a media presence we'll manage it next time round.

As I watched the Orange Order and the BNPites fill George (Independence) Square with hatred just 24 hours after the photo above, full of hope for our babies' futures was taken, I vowed that I will fight this cause until my dying breath or until we achieve it. 54% of those under 65 voted for this. The over 65s are the ones who had no real access to the truth as they read only newspapers and watched the TV news. They were lied to about pensions and threatened about benefits so we can hardly blame them. We need to find a way to adapt to their needs so they get the same information as we did. Failing that it should be possible in my lifetime and if it isn't at least no one will say I didn't try.
Posted by Phyl at 1:01 am