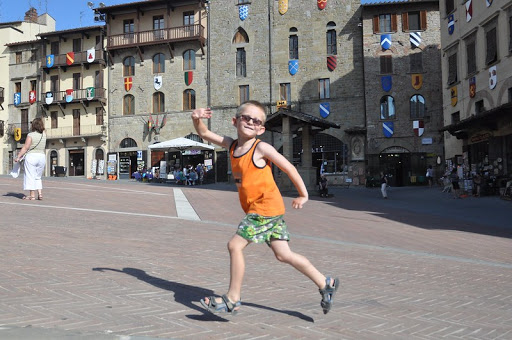 All of my kids are half foreign, despite the change of husbands midway. (Yes I have heard Marcel's teenage friends come out with - 'Bloody hell, did your mum shag her way round Europe?!') I try, myself, to put it down to studying modern languages, living abroad and finally working in bilingual publishing - in other words, I don't think I ever met a Scottish bloke after I left school!

Anyway, this has resulted in kids, some with pale eyes, most with blond hair but all with very non-Scottish skin. Not one of them has ever turned pink, they all instantly go that golden brown shade you never see here. And high factor sun cream is just a joke on them. Léon in particular, despite being the fairest with the palest eyes really acts like a native in the southern heat. He can literally run up steep hills in blazing 35 degree heat, without even flinching. On this square in Arezzo last week he managed to run and sprint for a good half an hour without even stopping for a drink (with both his younger sisters following him). I doubt many blue-skinned, ginger Glaswegian kids would have managed that with such enjoyment!
Posted by Phyl at 1:08 am