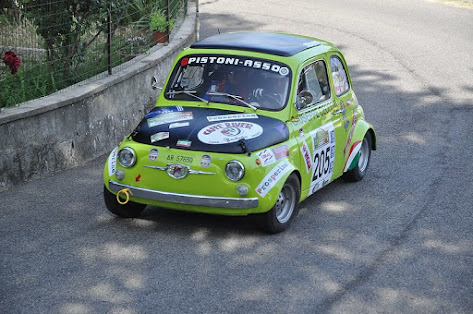 Thomas's parents retired up the Apennine mountains so we go there quite often. Driving up and over them isn't particularly hard once you get the hang of where all the hairpin bends are and memorize which chunks aren't wide enough for two cars.

On Friday 13 July, we offered to drive mum from one side to the other for a nice ice cream in a wee shop we like to visit once a summer.

I set out in my beautiful hired Fiat 500 with Mum, Charlotte and Amaia. Thomas set out in his rather more boring Nissan Micra with Anna and the boys and we started on up the mountain. Surprisingly, we were overtaken by quite a few cars on our way over. You almost never meet other cars on those mountains roads. We didn't think about it and sat and had our ice cream. 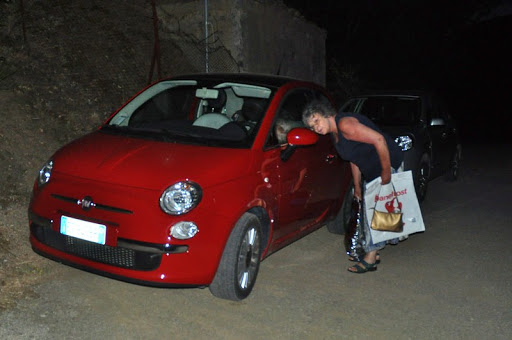 On the way home things were odder. Many more cars were coming towards us than I had seen on the way there. Again they were all going in the same direction. They were all fast little cars and they each had two males inside. It started to dawn on me that the annual Casentino rally was taking place the next afternoon so these cars were rally drivers out checking the route in their normal cars. I was no longer in any doubt when I rounded one tight bend to see a Lancia and an Alfa Romeo coming towards me at speed. The Alfa zoomed past me on the left (as it was meant to in Italy!) as the Lancia mounted the grass verge on my right on the very edge of the mountain, overtaking me on the wrong side simultaneously! I wasn't overly fazed... Italians drive wilder than us and I'm fairly used to it but mum look more than surprised!

So we took the kids on the Saturday to the rally. We had a great view point above a sharp bend in Brita's and Peter's village Pieve Pontenano. Some of the villagers had a programme and any thoughts I had about leaving before the end were dashed when I noticed the last car to go was a vintage Fiat 500 (pictured above). It came round the corner to rapturous applause and flag-waving, even if it didn't seem to be the fastest thing through the village!

Given there isn't much night life in Pieve, we headed down the mountain to watch the night rally at midnight too. It was much scarier and more impressive, though it probably took about ten years off my life. Sitting along a pavement okayed by the local Carabinieri, with Lots and Granny at the front, one car missed the bend and came hurtling towards us at full speed in the dark before coming to a stop less than a metre from Charlotte's feet! One of the people sitting beside us caught it on their phone.


And for any other vintage chuggy fans, once I'd stopped shaking enough to pick my camera up again, I caught it on the night leg too! 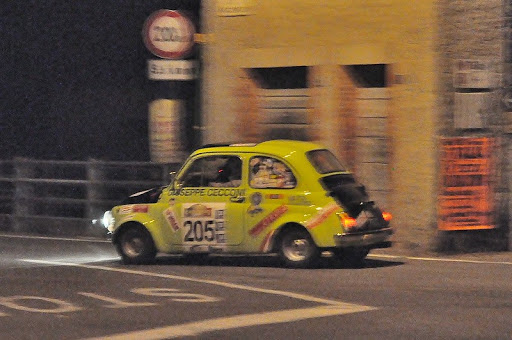