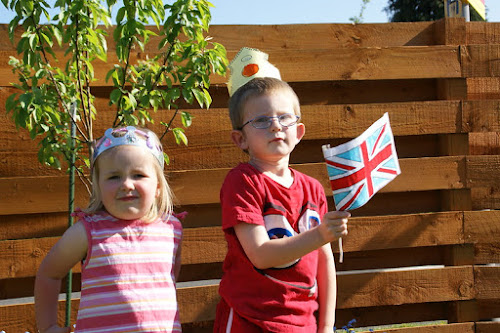 The week started with Léon and Anna blissfully unaware of that wedding. The only concession we have made to it is the 'I'm not a Royal Wedding Mug' mug I bought Thomas for his Christmas last year. Midweek Léon found out about it when he mentioned something he was looking forward to doing at school on Friday and I had to inform him school was closed. He asked why so I explained the Queen had given him the day off so he could watch the Prince's wedding on TV, to which he replied, disgruntled, that he'd much rather watch Octonauts. After today at school and nursery, however, they had both been as indoctrinated as is possible north of the border and infused with a vaguely puzzled scepticism as they came back in home-made crowns waving flags they'd been colouring in. They have now both told me they are meant to watch that wedding. I may allow them to watch three minutes either side of the You may kiss the bride - more than that would bore them anyway! I can't help but think the powers that be did exactly the wrong thing in Scotland by making it a public holiday if they actually wanted to stir up some interest here. Thinking back to my own childhood, I realized the only royal wedding I have ever watched was that of Princess Anne and Mark Phillips in November 1973. This was exactly because it was not a holiday and the entire school was forced to sit through the televised coverage in the audiovisual room. I remember the very shade of the carpet as I lay on it at just five staring into it for what seemed like hours! I particularly remember the contrast between the bright green of the carpet and the black and white of the TV we were all huddled around! I have managed to avoid all royal weddings since. By giving us all a day off we'll nip down the coast in the sun dragging our kids behind us, but if they'd been at school they'd all have been subjected to the Wills and Kate circus. This would have potentially created at least a few people interested in London's Royal Family... not that I'm complaining, of course!

Ahh - THAT'S why they made crowns in Ellens kindergarten today!