HE SEEMS TO HAVE INHERITED THE HOACHY GENE. 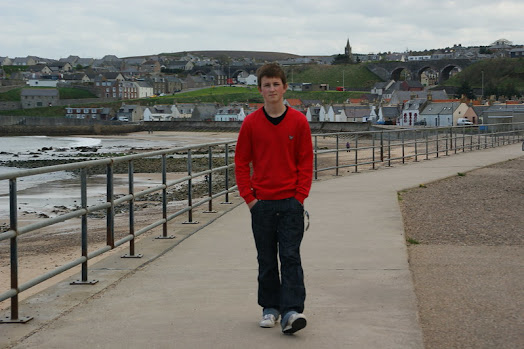 On Monday Marcel received a phone call from the shop across the road. He had applied for a paper round there a few months back. He was to start Wednesday as the student who had been doing it for the last three years wanted the summer off before going to uni. He agreed to take Marcel out on Wednesday and show him the route. Between them they managed it in just 20 minutes on Wednesday morning and Marcel positively enjoyed the early morning sunshine.

This morning he went out to work at 6-30am, saying he'd return at 7 as he only had 13 papers to deliver. However at 7 there was no sign of Marcel.

Finally he ran in at 8, in a panic. He'd delivered 12 papers but had been walking round in circles for over an hour not finding one street on his delivery round and his phone was out of credit so he couldn't google-map it.

He rushed into the shower, wolfed brekkie in one gulp, made his lunch and googled the missing address which turned out to be at the far end of Greenfarm estate. At 8-30 I threw him and Léon in the car (Charlotte had left on her bike) and drove him round. All the while he was worrying about how it would reflect on him delivering one paper ninety minutes late on his first day, muttering the guy from the paper shop would want to fire him if the customer had complained about him.

As we turned into the street and the garage was half open and a woman was fussing about in the porch of the house getting ready... so I advised him - you can't just deliver it, you need to apologize, tell her it's your first day and promise to be on time tomorrow, etc.

As he walked up the path, her wee yappy dog launched itself at Marcel barking like mad, so she came rushing out to drag the dog off him. They were both looking down at it. And I was in the car watching them. When they both stood up, smiles broke out across their faces and she started patting Marcel on the arm in a friendly manner! I figured things weren't too bad in that case, but was surprised when he walked back to the car shaking his head, looking dumbfounded and muttering a few expletives!

I asked what she'd said. It wasn't what she'd said that had provoked his reaction, it was who she was! If you are going to screw up on your first morning, who better to choose than your (French) French teacher who thinks the sun shines out of your backside anyway! What are the chances - a town with 23000 inhabitants, thirteen papers to deliver and he manages to get lost delivering to his teacher! Hoachy little bugger!