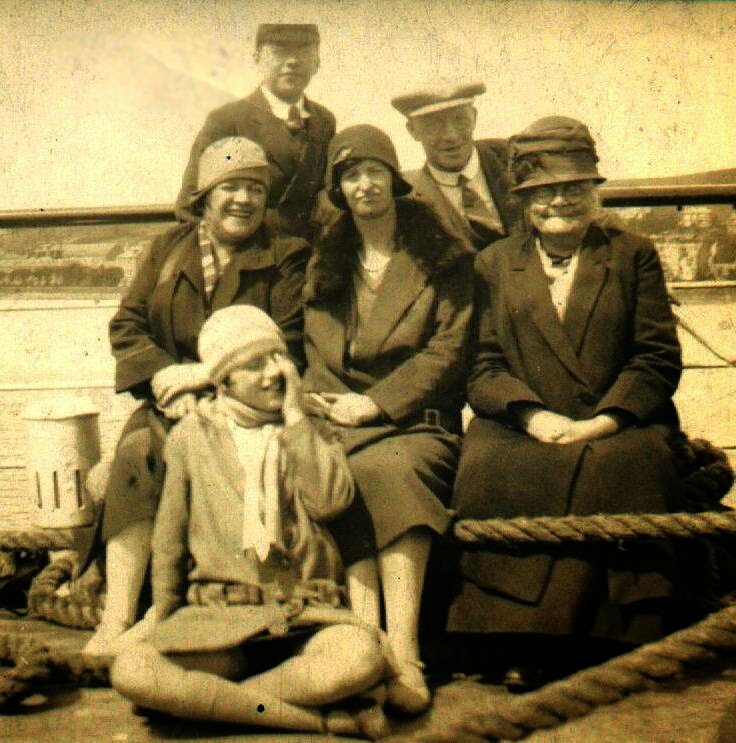 For the first 43 years and 2 months of my life my dad told me I was Scottish and voted Scottish Nationalist. He hung about in his kilt shunning all things English, ridiculing cricket, the English football team, the monarchy, the union Jack and everything else. He often ranted openly that we should dig a moat along the border and the likes. It was all in the friendliest manner of course, his best friend being an Englishman who takes a weekly ribbing from him at golf as dad challenges him on Thursdays to a match between 'auld enemies' that he invariably wins.
Then a week ago Thomas started researching records of births, deaths and marriages to fill out our family tree. He was surprised to hit a dead end already at my grandfather William Buchanan (see above photo: at the back), dad's dad. Although we knew his mother's name Mary Hannah Potter - she didn't seem to exist in any records. Still as you can see here in this photo from 1926 my granda and his mum Mary Hannah clearly existed... But Mary died two years before dad was born so he didn't remember anything about her.
Almost jokingly I suggested Potter didn't sound very Scottish and maybe he ought to check English records. An hour later my father not only had an English Granny, Great Granny and Great Grandpa but also an English Uncle James, Uncle Reuben, Auntie Alice, Auntie Florence, Auntie Amy and an Aunt Rhoda and Uncle Joseph born after his 100% English family moved from Manchester to Scotland! If anyone in the family was to turn out English, dad had to be the candidate with the most scope for comedy... Mum is joking about divorce, Derek is commiserating that dad found out too late to play for the English national football team, Thomas is asking if he wants him to switch on the cricket... the jokes haven't stopped all day! It is hard to imagine my granda never mentioned to his own son that his mother and all her family were English, but there you go!
As we dropped by today to laugh out loud at dad and see his reaction to the shame of it all, things couldn't have been timed better. After just twenty minutes, who should drop by completely by chance other than dad's English best mate Steve - I thought he was going to need resuscitating when he was told, given dad has told him English jokes on a weekly basis since they first met when I was 8! When I left, suggestions were being made that dad should perhaps be considering throwing a street party for the royal wedding later this month!
This one is going to go on and on, I can tell!
Posted by Phyl at 11:53 pm