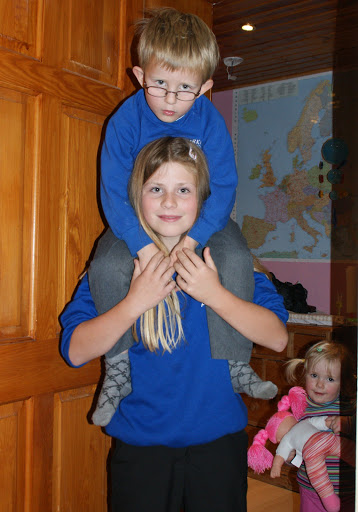 Little children can be so unfazed by the strange goings-on in the world sometimes. I went to pick up Léon and Lots from school yesterday. Léon gets out five minutes before Charlotte. How was your day? I asked casually as we walked along to the other door to wait. I had a great day he said and carried on to explain they'd had a Christmas party with drinks and crisps and a visit from Santa including a gift of a lego car. Fair enough. Then, as an aside he added I don't think everyone had such a good day though. I think some people must have been stabbed to death in the playground. The snow was covered in red blood! He seemed completely unconcerned at having been left by his parent in a school where children are stabbed to death during break! At that moment Charlotte bounded out. How was your day? I asked again (hoping for a less distressing reply!) It was the best, she replied. We spent our day working on our volcano topic and in the afternoon we got to take out the volcanoes we'd made, fill them with vinegar, bicarbonate of soda and red paint and watch them erupt and spew the red paint out all over the snow! Awesome! Aha! I am so happy to have a p6 as well as a p1. I imagine 20 other kids went home last night wondering about a massacre without an explanation whereas, by chance, I just happened to have a kid in the class responsible for the massacre!
Posted by Phyl at 12:37 pm