AN ODD SORT OF DAY 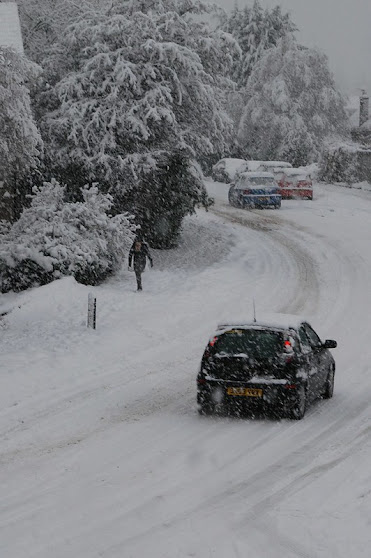 André had promised to take the two oldest kids to school this morning as he hadn't seen them all last week because of the weather and his (extremely unreliable VW). He was picking them up at 7-40 for breakfast. At 7-45 Charlotte walked into our bedroom... not a good sign. Papa can't take us because of the weather, she announced. I looked out. It was pouring with rain and the roads were completely clear. I harrumphed and got dressed, muttering under my breath that I hadn't been shopping so didn't know what they could have for breakfast or lunch. Poor Léon then needed to be dragged out of bed twenty minutes early because high school starts before primary. Out we went at 8-25 and we had a clear run up Crookfur road, Ayr road and Mearns road. Even Waterfoot road - on the summit of a hill in notorious cross winds was completely fine, just pouring with rain. Everyone was chucked out early and I cursed as I drove home via the post office to pick up a parcel. As I got out the rain turned to a flurry of snow with the largest snowflakes I have ever seen in my life - the size of oranges. Still I got home and had breakfast. An hour later I had lost sight of Thomas's car. By lunchtime I had ruled out picking up the shopping I had reserved at East Kilbride Argos! EK is a no-go area when Newton Mearns gets snowed in. I started to notice an eerie silence. The usual quarter hourly Harvie avenue bus service had ceased. Thomas and I were having a business meeting at 1pm when I started to hear a lot of voices. Kids in Eastwood and St Cadocs uniforms were walking up the middle of the road. Was the council evacuating the schools for the first time in my nine years as the parent of a school-aged child? I checked the school webpages. Both said School is open but please pick up your child as soon as possible. I dug out the car and tried to drive. Crookfur road was closed, or rather open but strewn with cars and buses. I tried Capelrig and got as far as the Ayr road. Within sight of the Broom shops I realized Mearns road had two buses blocking one side and two lorries blocking the other, I did a three point turn and abandoned ship. I walked up the middle of Mearns road between the abandoned buses. The silence was odd. There were no vehicle sounds, just the marching of many parents in wellies quietly trudging up the hill, interspersed with mixed ring tones and voice messages being played loudly. No one spoke as they went up. Everyone was trying over and over to contact someone on their phone. With Léon and Lots released, and Thomas manning the phone at home begging the high school to release Marcel with instructions on where to meet me and the wee ones (after 30 attempts at getting through on the high school switchboard), I made it back to the car. We watched a bizarre serious of cars each awaiting their turn to go onto the Ayr road, each being pushed up the last few metres by the occupants of the next car in line. I managed up without a push so felt quite smug. I got home two hours after leaving to pick them up, safe and sound. I see on the council web page they intend to reopen both schools tomorrow despite freezing fog. I will only be venturing out on those roads if they are safe. To get my kids I was prepared to drive, to send them out, no, sorry! In my 23 years of driving, I have never encountered such bad driving conditions (in this country) and most of the people out there haven't the slightest idea how to drive in snow!
Posted by Phyl at 12:56 am

Yes, the driving conditions yesterday were the worst I have ever witnessed in the Central Belt. First we had the rain to wash away the salt and grit then followed by an intense blast of deep Snow followed by the deep freeze.

I drove home from North Ayrshire last night and it took me 3 hours. Not bad for a rear wheel drive.
I had a short journey compared to some of my colleagues heading out of Glasgow back to Ayrshire which took them over 10 hours.

I wonder what kind of winter we will get when it arrives?