PHOTOSHOOT IN THE SNOW 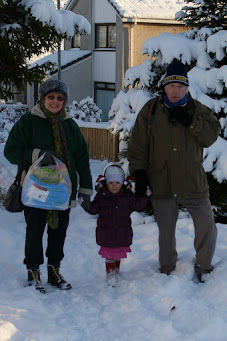 Since the snow began to fall last Saturday, one thing had been tinging the prettiness of it all with sadness for me. The knowledge that unlike every year for the last 25 years or so since Dad followed me down the path of amateur photography, we would not react to the first day of snow by ringing each other and saying 'Let's get out there with our lenses'. Since he started chemo a month ago, he's been out of the house maybe twice and given he had his big infusion appointment on Monday, I knew he would be asleep on his chair for the rest of the week. I would have to do my snowshoot alone, but somehow that didn't feel right. I didn't dare hope he'd manage out, the side effects of both his illness and treatment too terrible and numerous. On Wednesday morning the sky was perfect, so I decided I'd go out after lunch. Thomas was serving up lunch when I noticed I had forgotten something in the kitchen. I walked through and couldn't believe my eyes when I came face to face with Dad in my garden crouching in front of my igloo, camera in hand! After warming him up with a coffee we managed a ten minute walk in the snow with our cameras. Previous years' shoots lasted many hours but those ten minutes on Wednesday were far more precious to me than the old ones where time was taken for granted. To quote Paolo, nowadays it's the simple things that mean the most to me. And like the father in his song, mine too has a family filled with generations of loving fans.
Posted by Phyl at 12:37 am

Thanks my dearest, darling daughter ,, you have a wonderful way with words ,, I'm sitting here now in tears but loving them ,,, and you xoxoxox