IT'S OK TO CRASH ON XMAS DAY 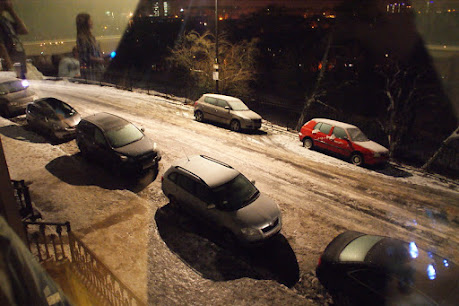 When we set out for my brother and sister-in-law's on Xmas day at lunch time it was pouring with rain. The temperature must have dropped though because on arrival at Park Circus cars were actually spinning on the ice completely out of control. On the flat of Park Circus that looked vaguely comical and I managed to avoid all pirouetting vehicles with my big people carrier but by Park Quadrant which is on a bend and a hill, things were less fun. I managed to edge mine into a space at the very bottom. It had been clear from the top that I would need at least three spaces to brake to a halt safely and getting the kids, presents and camera back up to the top was no mean feat as I was passed by pensioners trying to walk a poodle who was doing the best impression I've seen of bambi in years. In 25 years of driving these are the worst conditions I have ever encountered (including mountain passes all over Europe!) Upstairs, we took turns to watch out as cars came round the bend and glided past the window at 30mph without their wheels turning. They'd hit the brakes and carry on all the way to the bottom. Various pedestrians shot past on their bums too - we even witnessed a four-man pile-up on the pavement! I am utterly amazed not one of our four cars was hit while parked there. Obviously Glasgow City Council doesn't grit for anyone on Xmas day, whatever the conditions!
Posted by Phyl at 1:03 am