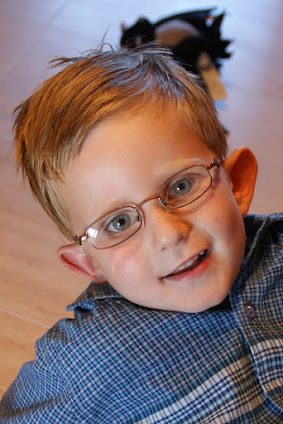 You may just have noticed that I've stopped ranting about Léon's spots. Since he turned two, he had been plagued by sore little cysts under his cheeks that no number of trips to Yorkhill seemed to get to the bottom of. He had a total of four or five days in the last three years without a sore or bleeding spot on his face. Round about August, I started to notice that the spots were becoming less and less frequent. They had always said he'd grow out of them but I was afraid to blog it, or even say it out loud to my family in case that put a nail in the coffin of his recovery. Today he had his six-monthly check-up so I couldn't exactly not mention what I had noticed! The consultant was so pleased with his skin, she has told me she no longer wants to see him, unless he has a relapse. So maybe, just maybe, we've reached the end of the spot crisis! :-)
Posted by Phyl at 6:32 pm

Email ThisBlogThis!Share to TwitterShare to FacebookShare to Pinterest
Labels: health

This is the best news I've heard for yonks !