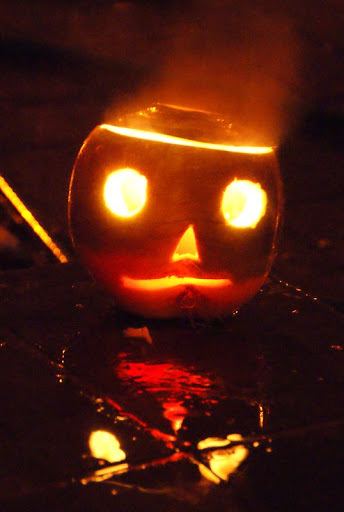 So Halloween came round again and I decided to take a stance against all that pumpkin and trick or treating nonsense. I was asked by my kids to buy a pumpkin so I decided to educate them in how things used to be before the ubiquitous American pumpkin took over the country/(world?) When I was a child we bought swedes (which we called turnips) and our Gramps hollowed them out because they are bloody hard to hollow out. So turnip-carving was a mystical moment when the kids sat round a trusted old adult adoringly watching him carve out the flesh. The up side of using such a hard bugger was that it didn't collapse in on itself after three days turning into green, smelly goo, it actually lasted quite a while. Also given they are quite small we used to put a string on them so they could be carried about a bit like a handbag! I also banned the 't' words in my house. Every time a child mentioned one of the 't' words I corrected them to the word 'guising' despite it being met by a sigh each time. I'm not sure my Scottish Halloween made any impact but you can't say I didn't try.
Posted by Phyl at 9:16 pm