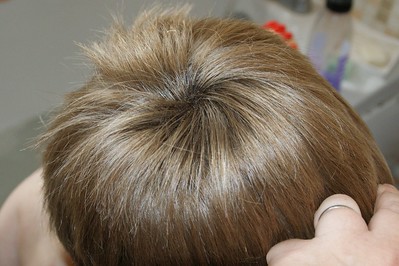 They all get nits at some point from nursery. Léon has never caught it and has only six weeks nursery left so I thought we were safe. Then last night I noticed he was scratching his head. I parted his blond hair to see lots of little black dots. Ho hum!
I dug out the old nit comb and forced the poor little bugger to sit still for half an hour while I combed each strand of his very thick hair. I removed bucketloads of the little black dots but found no eggs or beasties. How strange. I put on my glasses which I almost never use to see if I was missing something but still no bugs. Given his head was so full of the gritty bits I was astonished to find that the bugs had moved out en masse but there you go. I checked all the other kids and there wasn't a single sign of nits on them - weird again. I washed him and sent him back out to play with clean hair.
I looked out the window to see both Léon and Anna playing on bikes. Only Léon has a bike helmet because Anna has only started playing on bikes this week for the first time in her life. Léon has kindly lent her his bike helmet. Léon then cycled past wearing a dirty old flowerpot on his head. D'you like my helmet? he shouted as he passed.
I lifted it off and parted his hair - back to square one! It seems the nits were actually dried mud! Silly wee man - why do little kids not think to ask the obvious - I've just been wearing a plant pot mum - could it be mud?
Posted by Phyl at 10:48 am