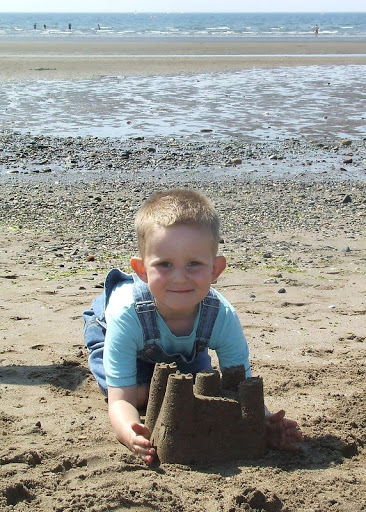 Today Léon went to school for the first time ever. The induction process began a few weeks ago with parental meetings which I have been attending and trips by his teacher to his nursery, but today was his own first trip into school as a class to meet his teacher in situ and his classmates, not all of whom attend his nursery. We dropped him at the school gate at 9-30. Many of the children looked somewhat apprehensive clinging to their mums and needed coaxing in. Léon stood beside me till he saw they'd to line up in the playground. He ran in. The head teacher gasped as he almost knocked her over galloping through the gate. Wow this one's enthusiastic, she commented. We went to the dinner hall for a talk and waited nearly three hours for him to return. When the dinner hall door opened most kids ran to their mums' arms for a hug of reassurance. Léon, too ran towards us. I bent down for him to throw himself into my arms. He stopped, put his head close to mine and whispered Do you have money for me mum? I'm just gonna go get myself a school lunch! He seemed more confident than I had been expecting. Did that make me feel proud or sad...? So off we went to buy school dinners. I watched in amazement as somehow he managed not to drop the tray of food onto which he'd heaped a bowl of chicken noodle soup, 4 meatballs, mash, turnips, a box of raisins, a carton of apple juice and a tub of ice cream, not to mention a knife, a fork and two spoons. I didn't know my wee man was capable of walking so far balancing things - he never seems to manage it at home. He sat down and ate the raisins, then took a spoonful of the soup. It was too hot so he ate the four meatballs, followed by the ice cream, then the mash and then a bit more ice cream and finished up with the chicken soup, an efficient if interesting way to eat. He seems to have survived and enjoyed his first step towards independence.
Posted by Phyl at 12:25 am

And there was me thinking you'd finally seen the light & were looking to a new Free Scotland !!