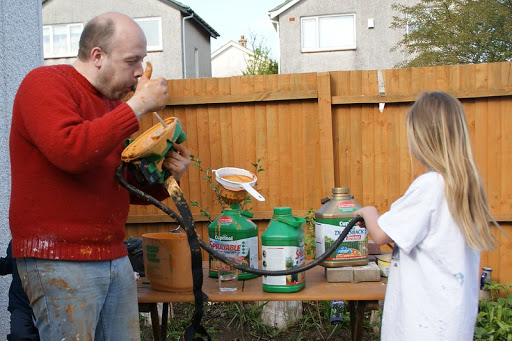 We live in a corner house. When we moved in there was no fence on one side, just a conifer hedge but we thought a perimeter fence to fill in the gaps was advisable given how many small children inhabit our world. So there are now approximately 80-100 metres of wooden fence at various points round our garden. Of course 100 metres of fence is actually 200 because a fence has two sides. We painted the outside at the back of the house manually. It took about five hours so we decided that we had to find a better solution. We went to B&Q and found a sprayer because painting a 1m80 fence would take forever. First time we tried it (a couple of weeks ago) we realized we couldn't use the sprayer near the plants or fruit trees because everything was being completely coated with paint. We spent half an hour painting with it and Thomas spent an hour cleaning it afterwards :-( On Tuesday I went out and painted behind the trees manually. It took about five hours. My shoulder throbbed and I was covered in paint. I was knackered. Second time we tried it, it stopped working after the first ten minutes. It was clogged with paint. Thomas spent an hour cleaning it and then sieved the paint into it only to have it clog again after ten minutes. A second and third time Thomas cleaned it out, finding it only worked if you blew the paint out of it. It took two hours to clean the sprayer and half an hour to clean his beard. In the meantime I spent six miserable hours painting again manually. Third time it clogged we threw the useless piece of crap in the bin and both took out a paintbrush. We have about five hours left on the side of the house and maybe three on the other side. I am now sitting here recovering with a chunk of cake and a large gin. My shoulder aches, my arms ache, I feel like I could use a double hip replacement. The next time the fence needs painting, I am going to put the house on the market.
Posted by Phyl at 11:54 pm

Email ThisBlogThis!Share to TwitterShare to FacebookShare to Pinterest
Labels: rant

Take it back if it is "not fit for purpose ?"
Or are you maybe supposed to clean it out with turps or equiv after every use ?

It was waterbased paint. I would have taken it back if I'd just bought it but it had been lying in the garage for over a year before I tried it :-(