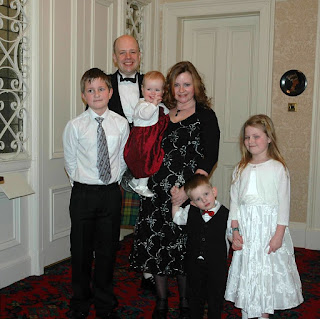 Charlotte's French homework tonight was to draw a family tree. Obviously given our French background, this would have been possible for her despite the only vocabulary on offer being mother, father, brother, sister, grandmother and grandfather. But given at least 25% of the kids in her class would have needed to know how to say 'step mother, step father, half sibling, step sibling, step parent's mother or father etc etc , it is maybe time for a rethink of such exercises. By the time Marcel reached p7 at least half his class had divorced parents. Charlotte, of course, went about things unconventionally. She first said she couldn't do it so would base it on a fictional family. She then decided to base it on me, but realized I had no sisters so she would prefer to use herself given she has both brothers and sisters. She drew herself, Anna and the boys. She then drew me and labelled me as her mother. I asked if she was going to add Thomas labelled Mum's husband, then add André and his Chinese wife. She said no, her page wasn't wide enough, so she added an unnamed father beside herself, explaining as she went along that if she drew the hair very short it wouldn't be overly obvious if it was Papa or Thomas, and then proceeded to add Thomas's parents above the 'father'! Confused? You will be after this episode of Soap...
Posted by Phyl at 12:41 am