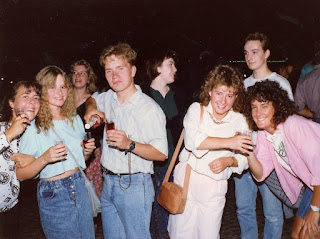 Everyone seems to be asking 'Where were you when the wall came down?' By sheer fluke, my uni course meant I was sent to live in Germany, or rather West Germany, from March till August of 1989. Daily I watched on the news as more and more people trickled across the DDR border into Czechoslovakia then over to the West, not realizing that what I was witnessing firsthand was about to be one of the most important historical events of my lifetime. It was exciting, but none of us knew at the time whether it was a temporary situation that would be stopped again by some Soviet tank or whether the DDR would simply end up empty! Even in the August it wasn't obvious that the wall had to come down. It seems unimaginable with hindsight that we didn't see it coming! In August I moved back to France (Besançon) where I stayed till October. I must have returned to the UK around 5 October to matriculate for my last year at uni. I must say I was kicking myself when the wall came down that week - if I'd known how close I'd come to witnessing in the flesh the demise of the wall I'd heard so much about from my dad throughout my childhood (he often worked in Berlin), then I'd have jumped on a plane to Berlin rather than Glasgow!
Posted by Phyl at 10:24 am

Email ThisBlogThis!Share to TwitterShare to FacebookShare to Pinterest
Labels: history

Yeah, what a miss .,., I'd loved to have been there that week too ,,
I actually shed a tear that night watching it live on TV
So often in the years before I'd been in a car that turned inadvertently into a dead end street in West Berlin with that awful wall straight in front of me.
I only once went into East Berlin thro' Checkpoint Charlie ,,,with automatic rifles pointed directly at my head as I awaited clearance .,., similarly on a "touristy" walk along the Brandenburg Gate walkkway near Xmas time I had a high power rifle trained on me from start to finish by one of these East Berlin soldier Guards, the guys with the Great grey coats and Russian style fur hat .,.,This gate btw is supposedly a symbol of PEACE !
Not a comfortable experience I can assure you ! But I wouldn't have missed it for anything. Sadly I haven't been back since the wall came down, but one day ???