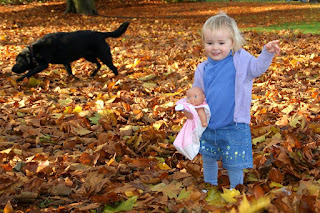 I quite like autumn really. From a colour point of view it is the prettiest season... when you are somewhere further south than Glasgow anyway. Until I lived in France I didn't really notice autumn. In the Glasgow of my childhood autumn had always seemed to last just one weekend. The leaves turned brown and were blown off the trees in a gale within 24 hours, 48 at the most. In France I watched in amazement at 20 as autumn (a fairly warm and sunny season) lasted weeks and weeks. Since then I have tried to be more aware of Scottish autumn. You have to start watching out for it the second week in October, with the first weekend in November usually being the optimum photo weekend. This year must have been windier as the trees had already reached week two of November stage when I was in Glasgow today with my camera - bummer. But the colours on the ground were beautiful, even if I had missed the best tree stage. Anna wasn't too sure whether she liked her feet disappearing under the leaves and I think she'd have felt more comfortable kicking them about if she had been wearing boots. The only unfortunate thing about autumn is the inevitability of winter following it.
Posted by Phyl at 12:55 am