HOME ECONOMICS THEN AND NOW 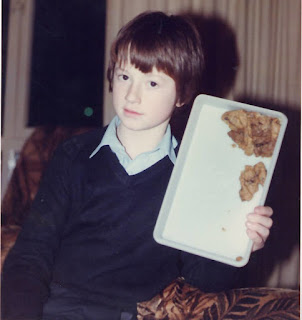 Here's a photo of my little brother at the age of 12. Derek started high school as I entered my 5th year. He got double home economics twice a week. Eighty minutes of sewing that made me laugh, and eighty minutes of cooking that tested my ingenuity... He used to stand on the main stair case and wait to pounce. He was quite small at 12 so could hide behind other pupils. Just when I thought it was safe, a little voice used to squeak: Do you want to taste my onion soup? ... my coffee buns? ... my soufflé? etcetc You don't want to knock their confidence and you don't want to be nasty when your sibling is actually being nice to you for once, but those five words Do you want to taste... used to strike terror into me. As you can see, his coffee buns weren't the most appetizing. His onion soup was like hot dish water with a raw onion floating on top. I soon attempted to find a way to the top floor, avoiding the stair case! I tried being early or late to classes just so he couldn't find me. Although his initial culinary adventures were pitiful, he soon learned the talent of gourmet cooking and these days I actually look forward to a dinner invite! Although school didn't teach him to cook, it at least tried to make him rustle up some real food.
I was discussing cooking lessons with a friend the other day. Marcel hasn't started cooking at school yet but given he cooks an evening meal for six of us every 5th day or so (as does his nine year old sister), the calibre of the lessons didn't really worry me. My friend's son is also 12 and has already started cooking at school.
The first problem these days seems to be the lesson length. They have fifty minute periods and don't double them for cooking. Secondly, of course as always these days, is that the first fifteen minutes are then taken up with all the usual health and safety bullshit. With less than half an hour left once you consider the tidying at the end, they have no time to teach them anything that will be remotely useful for life.
My friend's son's first cooking lesson was called 'How to make an empire biscuit'. This is a bit basic (more what I'd expect Pudge to be doing at nursery) but if they had actually taught them how to do that, it wouldn't have been a complete waste. It turns out that they didn't have time to bake the biscuits and let them cool enough to jam and ice them. They had these 12 year olds simply take two digestives from a supermarket packet, jam them together and spread ready-made icing on top. If it wasn't so tragic, I'd laugh.
Giving them the benefit of the doubt my friend assumed they were trying to gently break in those who had never cooked before. The second week's lesson was entitled 'Homemade pizza'. She figured that at least might come in handy one day if her son goes away to university. But no, poor Gordon trudged home this time with a slice of cold toast with ketchup and grated cheese on top, wondering if he was going to have to live with his mum forever or die of starvation at 18. His mother is now teaching him to cook herself.
You do have to wonder in this age of ill health and obesity, if this really is the best our schools can manage. Personally, I'd rather Marcel did no cookery than this useless nonsense!
Posted by Phyl at 10:17 pm

I must admit I'd never heard of empire biscuits but was amused to read on Wikipedia that in Glasgow "they are now being called "Commonwealth Biscuits""!

Glad to see you have noticed the improvement in my culinary skills. Think i may have killed all of us by now if the coffee buns had remained my masterpiece :-)