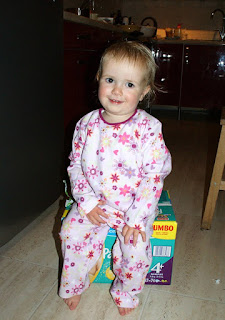 This whole feminine thing is starting to faze me. Having spent nearly ten years with a girl who has a tantrum at the mere mention of a dress, I suddenly have the other extreme. Anna loves shoes and flowers but she's also starting to get opinionated on things that aren't feminine enough. Two nights ago Thomas tried to put Pudge's old blue puppy babygro on her at bedtime - she sat sobbing the word Wower over and over as if the doggy PJs were offensive (though they were fine till last week). Also most mornings this week after breakfast when I have said Time to get dressed she has simply replied with a determined tone Wower clothes. It is just as well the obsession is flowers and not something less common! Yesterday with some negotiating I managed to get her to accept a pinafore with a teddy on it, but I do believe we'd have had a battle if it had been trousers with teddies instead of a dress. She accompanied me today to pick up Pudge to nursery. Half way there we had another fit of hysterics - when she was finally comforted enough to speak, she managed to tell me she was distraught because she'd come out without her handbag! Bizarre! As Marcel said last week: Anna's quite a girlie girl - it's weird - I've never really had a sister before!
Posted by Phyl at 6:49 pm