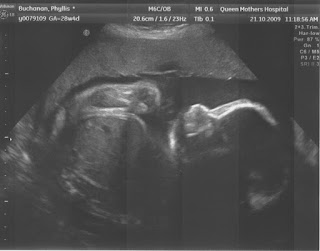 Yesterday I went into QMH for what I expected to be my usual least favourite ante-natal appointment. At 28 weeks I usually get dragged in for a painful shot of anti-D because of my rhesus negative blood. I know I shouldn't complain given this disease wiped out all my aunts and uncles but it is bloody nippy :-( Anyway the midwife decided to quickly examine me while I was in and suddenly my 10 minute appointment stretched to a whole morning... Anna was not amused! My 'fundal height', which should have measured 28cm, turned out to be 34cm. I was assured it was probably excess fluid but sent off for an unscheduled scan which revealed 'Baked Bean' was more of a 'Broad Bean' and looking more like a five week older foetus. The woman radiographer said at least three times 'Wow this is a big baby' - too much info thanks! So I am being dragged in for a morning of glucose testing next week to see if I have developed (for the first time ever) gestational diabetes. My gut feeling, given my urine is clear, is that my morning of fasting and sugar shots is simply going to result in more wide-eyed proclamations of 'Wow, she's big!' but I may stand corrected. Bemoaning my situation today to a friend who is of the same stature as myself, she tried to reassure me that when her son was born three years ago, she was more than surprised to be told he weighed in at 9lb9 (4.4kg in real money) - hmmmm, I'm not sure that cheered me up, thank you!
Posted by Phyl at 12:32 am

Email ThisBlogThis!Share to TwitterShare to FacebookShare to Pinterest
Labels: pregnancy