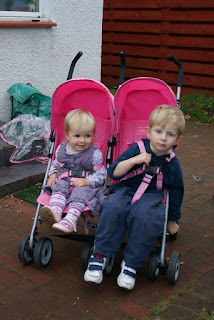 With my pram (or rather Maree's pram) missing a wheel, I have been trying to find a cheap solution for transporting Anna and Baked Bean when she turns up. The most obvious one was Baked in a papoose and Anna in her buggy till next summer when she's more capable of long walks, but I'm not sure my back fancies that for long trips. Buying a new pram at nearly 42 seemed a bit crazy too... surely I can't have many more kids after Baked? (only winding you up again dad!) So onto Ebay I went. I bid on a few double Mclarens and Silver Crosses but they all hit £100 before p&p and I was getting frustrated. Then I saw (or was it heard?) this PINK one. Funnily enough bidding hadn't gone beyond £25 in the final hour and Baked is a girl too so I bought it. It arrived today in a box so covered in parcel tape I thought both girls would be at school before we managed to break in. Pudge thought it was soooo beautiful and asked to try it despite being way too big and Anna, with her overly girlie tendencies decided it was so nice she refused to get out of it for half an hour. I am dreading my first trip to ASDA this week when she realizes I intend to put her back in the dark blue single buggy until January. She's liable to try killing me!
Posted by Phyl at 12:08 am

Christ, this one is either Lady Pelelope or that old fool authoress Barbara Cartland, re-incarnated !
Although she could also just be an admirer of the USA golfer Paula Creamer ,,I'll work on that theory !! Pink balls coming up !

Not sure - when asked her favourite colour she always replies 'pu-pel'... mind you, I'm not sure she knows any other colour names!