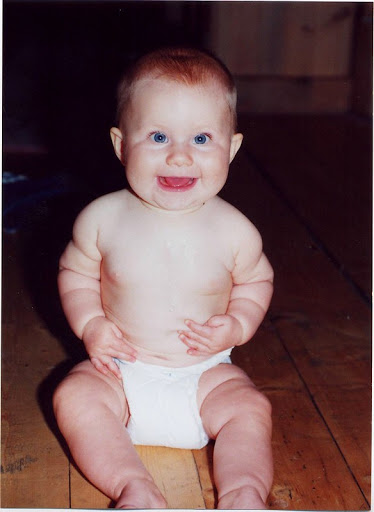 08August 4 Originally uploaded by PhylB
I hear they've decided to re-do the weight charts for infants basing averages on breast rather than bottlefed babies at last. It seems breastfed babies are less overweight than formula ones. (You can see how skinny (exclusively-breast) Charlotte was at just 7 months!) By introducing the new system they want to pinpoint formula kids who are at risk of obesity and reassure breastfeeders that their underweight babies don't need topping up. I often wonder why mums listen to health visitors at all and constantly rush out to have their babies weighed weekly. Anna is 16 months old and has been weighed once since her 10 day sign off from post-natal carers. I have never taken her to be weighed because instinctively I know she's ok. She is growing, putting on weight, changing clothes size. This I might add isn't down to experience. I didn't have the others weighed either. I wish more mums would trust their instinct. I often heard a reason to swap from breast to formula being that the mum could then see how many millilitres/ounces a baby was taking at each feed. But when I often asked why they needed to know quantities if the baby is growing and content, I was always met by a blank look as if I was mad. One thing I have always found puzzling, probably because I have only gone out an average of once while my kids were still exclusively on milk was knowing how much to express. I have no idea whether I should leave 20ml for an evening out or 2 litres. I simply have no feel for how much milk a baby under 6 months drinks... I don't need to know, not if my child seems happy and healthy.
Posted by Phyl at 12:29 am

Couldn't agree more. Take one look at Ellen (exclusively breastfed except about 8 hours, while I had surgery) and everyone can tell she's well fed. :)

In my antenatal class we were told that breastfed babies and bottlefed babies will grow differently, but the difference will be gone by the age of two.

Right now I actually would like to know how much milk she's having from me - she has a middle ear infection and don't feel like eating og drinking, except from me. So it would be nice to know if she's getting enough. But as long as she's complaining, she's not that bad off. :)