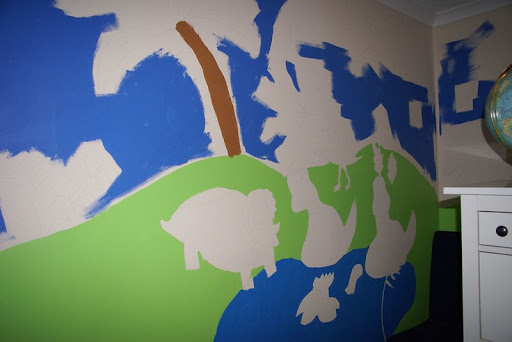 I should have known Léon was too quiet. He bounced on my head at 7-40am then disappeared. I fed Anna for 10 minutes then got up. 'Léon - where are you?' I shouted. 'Just painting' came the ominous reply. I clung to the hope he simply meant he was looking at the mural I am in the middle of painting on his bedroom wall but as I opened the bedroom door I saw he'd accidentally overturned the pot of brown paint Charlotte had been using on his tree trunk last night and had left on his toy box. The wall (the low blue bit) was splattered brown, the carpet was covered in brown, Léon and his pyjamas were brown. There were brown footprints all over the hall carpet. Léon of course was as happy as Larry. I guess laminating Léon's bedroom floor has now moved from maybe some time in the future to as soon as possible.
Posted by Phyl at 9:49 am