A strange move from Lærdansk

I started my Lærdansk course on the 3rd of January. All foreigners who move to Denmark are eligible for a course in Danish to help them integrate in society. There seem to be many levels and you can do classes for many years as far as I am aware.

Here are the levels: 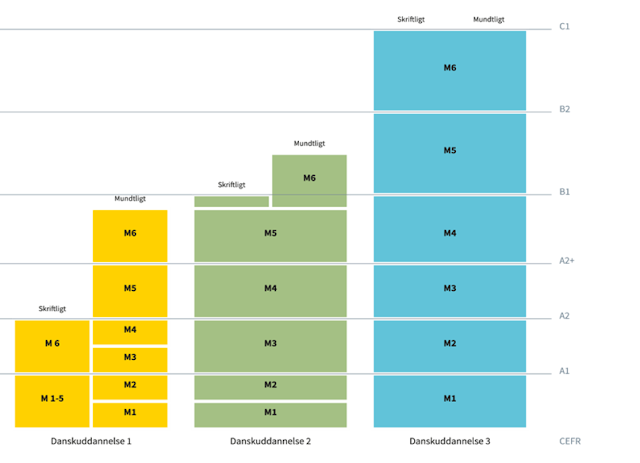 Because I had learnt a tiny bit of Swedish back in 1990, I had a fair overview of how Scandinavian grammar functioned - all those weird definite articles glued on to the ends of words yet possibly the easiest verb system on the planet... And because I had listened to my husband speaking to my kids back in Scotland for the last 14 years and had visits from Thomas's family, I was used to understanding spoken Danish. Spoken being the operative word here! I had never learnt to spell Danish (and it is about as close to the expected spelling as English😜) and having spent less than 7 weeks of my life in Denmark (as Thomas's parents had retired to Italy just after we got together), I could count the number of sentences I had actually produced orally on one hand.

Anyway, after an assessment at the end of last year and given my linguistic background, I was dropped in at the deep end on level M4 in the blue column. It was daunting. I had never written a word of Danish, had never seen inside a Danish grammar book and never spoken it and suddenly I was up to my eyeballs in hand-ins and grammar exercises. Still a bit tongue-tied as French, German and even Italian still fall more readily from my lips, I had definitely got the hang of writing things in a reasonably understandable manner when Corona hit and the school was shut down.

After less than a week our lessons went online and to my surprise, instead of learning less, I was actually learning much more. As we were now in groups of between five and eight students, the chances of being asked a question tripled and so did my attention to homework. In such small groups, I was forced to talk more, read more, write more and I really felt like I was getting somewhere. The online lessons were a godsend and though I moaned before each one, I always came away feeling that they had been incredibly worthwhile.

Then suddenly after about ten weeks online, without any consultation Lærdansk sent me a text last Thursday saying all online classes were being cancelled for the remainder of lockdown and teachers seem to have been put on garden leave. The teachers aren't happy as we found out in the one remaining lesson we had before we mothballed our grammar books, and neither are we. I expect, given there will be a max six of seven lessons between the end of lockdown and the beginning of the summer recess, this will probably kick most of us back a few months and all that hard work we put in over the first few weeks of lockdown will have been in vain. I'm lucky enough to live with a Dane but many in the class will have no contact with spoken Danish from now till July.

It is such a shame that decisions are taken on the basis of what makes best sense economically, rather than on what we were actually managing achieve.
Posted by Phyl at 11:49 am