They will never all be happy 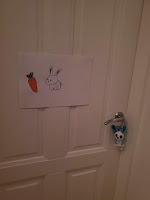 This is the dining room side of Amaia's bedroom door. She's decided she wants a bunny and she's decided that emotional blackmail is the way to go. I can't really be bothered with a bunny. I'm not cleaning hutches, I'm not putting it in every night, clipping nails, getting bitten or any of the rest.

Léon wants chickens, because he likes to watch the neighbour's chickens. This seems slightly more useful, but again, I can't be bothered cleaning anything out and I'm sure, after the hamster years, that I will become the hen house cleaner.

Moreover, we know no one on Funen, and intend, under normal circumstances, to leave on holiday several times a year, so pet sitting could become an issue.

Now, Léon has started bombarding me with videos of cute little fuzzy puppies, claiming to have solved the problem as puppies don't need cages. Give me strength! He claims it is crazy to have 9000m2 of garden and no pet to play with on it. Anna has added to the mix with kitten photos. Having had cats in the past, I find them the most tempting but Charlotte categorically wants no pets, especially nothing furry, and intends (on more normal years) to spend many months here. Amaia only wants something that can be caged and says she will not accept cats or dogs. So, no matter which route I go down, half of my kids won't talk to me again!

Maybe if I just play them off against each other long enough, they'll all go off to uni and I can breathe a sigh of relief.
Posted by Phyl at 4:28 pm