So, this morning was the much-awaited day. For the first time in nearly six weeks, we had to set an alarm for 7am, make a lunch, fill a school bag etc After a last minute hiccup yesterday, when we realised Amaia had grown out of most of her shoes(!), all went well today.

We had been issued all sorts of instructions, beforehand. The first was for the school bus. Kids are no longer allowed to enter by the front door and chat to the driver. They are let in through the side door and scan their contactless (free) travel cards. They are then only allowed one child on each double seat. The bus that usually has a half dozen kids in it by our stop and that fills completely with middle school kids at the village when the lower school kids get out, contained just one lone little red-haired girl when Amaia got on this morning. All the other usual bus kids are over 11s so not back at school yet. Ours is the last stop before the village so only two went up the hill in it today.

It was a lovely morning so I walked her to the bus stop as she usually walks with her siblings and I thought it might seem a little odd alone.

On arrival she had had instructions for which door her year was to use. Each year was using a different door and a different playground - much like they do at Kirkhill usually but in this school they are normally allowed to enter by the door of their choice and play wherever and with whoever they like. They can even play in the woods behind school if they like as they've built ladders and tree houses in the woods.

On entering the building they were to queue up to wait to go to classrooms, rather than all meeting to sing together in the assembly hall which is their usual start to the day. Lines had been drawn everywhere, 2 metres apart, so they could each stand on a mark safely while waiting for their teacher. Every child had been given a new peg, two metres from its nearest neighbour.

Instead of a main/Danish teacher, a Maths teacher, a PE teacher, a music teacher and an English teacher, as she usually has, she was assigned her Danish teacher only, to minimise contact with adults. They had an hour of Danish, then went outside together for an hour, then they had an hour of Maths and again another hour outside, finally they had some art and design and another hour outside. Each child now has their own table with their name on it. It has 'a llama space' to the surrounding desks. They washed their hands every hour and generally had a really lovely time. They were allowed to stand two metres apart hugging the air to symbolise to friends they were giving them a hug.

All in all, she says it was a perfect day... seeing all her friends, having three hours of formal lessons and also having three hours of less formal outdoor-in-the-sunshine play learning! Maybe it's a little less academic than usual, but she's ten! In Denmark she still has nine more years of school as they don't finish till 19 here, so a summer term of sunshine to remember sounds perfect!

It's definitely the happiest I have seen her since all this began! We got one very happy little girl home today. 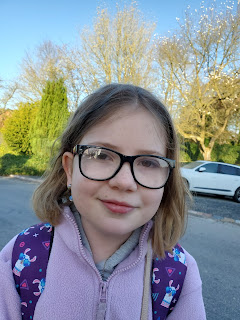 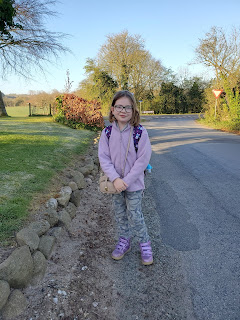 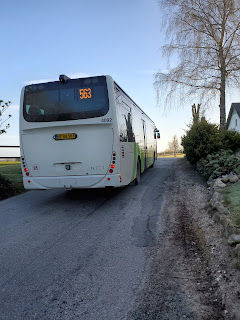 Hopefully this will be the first step on the road back to normality.
Posted by Phyl at 2:38 pm