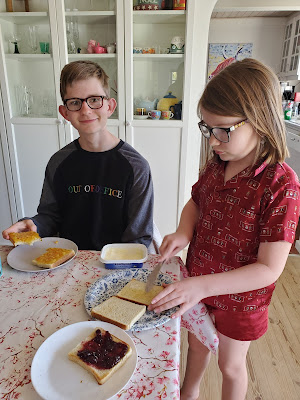 Léon has taken to eating quite a lot of marmalade since we moved here. He just loves Danish marmalade, which has even more peel in it than the UK equivalent!

Over lunch the other week, he joked we should start calling him Paddington. Thomas, then happened to mention, that when he was a child, he had read many Paddington books, translated into Danish of course, because he couldn't speak English back then. They'd been badly translated though, as many books are, and had translated marmalade simply by 'marmelade', which is just any kind of jam in Danish. I was less aware of this as the standard word for jam that I know in Danish is 'syltetøj'. He sheepishly admitted that until he'd seen the English originals, when he had had kids of his own, he'd always pictured Paddington eating strawberry jam!

Unimaginable!
Posted by Phyl at 6:25 pm